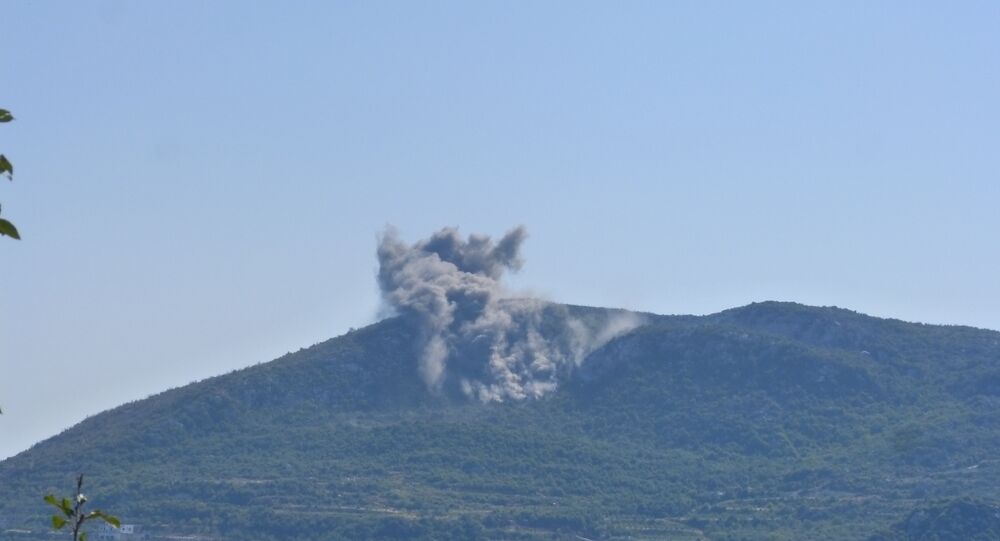 Syrian artillery units were deployed to the region to eliminate Nusra Front* positions after the al-Qaeda-affiliated militant group attempted to carry out a series of strikes against army positions, civilian settlements and Hmeymim Airbase.

The source said that the coordinates of the locations of terrorist bases were provided by military intelligence, which has been carefully monitoring the situation near the border areas with Turkey. The Syrian Army has established observation points at strategic heights in the villages of Qabbani and Badama.

The vast majority of Latakia governorate, including the city of Latakia, has been cleared of armed militants over the last four years after the Syrian army launched a counteroffensive against the terrorists. The region's northeastern-most territories, bordering on Turkey and the militant-controlled province of Idlib, remain under terrorist control.

© Sputnik / Morad Saed
Syrian soldier chilling on a hilltop with a cigarette as he monitors artillery strikes against militant positions in Latakia.

The situation in Syria's Latakia governorate led to a spike in international tensions this week after the Russian military lost contact with the crew of an Il-20 reconnaissance aircraft during an Israeli raid against targets in the region. The aircraft was reportedly destroyed accidentally by Syrian air defenses as they attempted to repel the Israeli attack. All 15 Russian servicemen on board were killed. The Russian Defense Ministry accused the Israeli military of deliberately creating a dangerous situation and using the plane as a shield against Syrian air defenses.