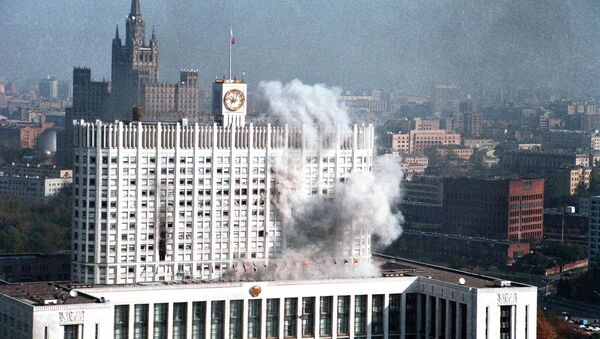 The constitutional crisis of 1993 appeared as a continuation of a political standoff between the first president of the Russian Federation, Boris Yeltsin and anti-reformist opponents led by Vice President Alexander Rutskoi and Chairman of the Presidium of the Supreme Soviet Ruslan Khasbulatov.

Political disagreements between the two sides reached a tipping point in late September, when Yeltsin sought to dissolve the parliament, even though the president had no such power under the Constitution.

Yeltsin Era From Joy of New Beginning to Disappointment
His bid was, however, met with strong opposition, with the parliament declaring his decision illegal, dismissing Yeltsin and proclaiming Rutskoi as acting president.

In October, the conflict drastically evolved into armed clashes in the center of Moscow, reaching a climax with the assault of the Ostankino television center and the city hall, as well as the deployment of military equipment and shelling of the White House.

According to various estimates, about 160 people were killed and hundreds injured as a result of “Black October.”

Speaking with Sputnik, Sergei Filatov, the head of President Yeltsin's administration from 1993 to 1996, stressed that the autumn events cannot be regarded solely as a conflict of 1993, because it originated much earlier.

"The Supreme Soviet wanted to remove the key figures of power, to make reforms take place under their control, which, of course, was impossible, since Yeltsin was elected in 1991 to strengthen the executive branch and speed up the reforms.  All was done to this end, and giving everything to another force was flagrantly dangerous," he said.

Filatov admitted that although his assessment of the 1993 developments had not changed, he now regrets that it was not possible to hold a re-election of the parliament immediately after the historic April referendum, dubbed "Yes. Yes. No. Yes."

"If we re-elected the parliament immediately after the April referendum, it would’ve been better. This is what I probably regret… But the Constitutional Court interfered – it basically back heeled on the run when it announced that the results of the referendum didn’t have legal force, and they could only be considered as an opinion poll," Filatov elaborated.

The ex-head of the administration of the first president explained that the dissolution of the parliament after the referendum would’ve happened smoothly and wouldn’t have escalated the situation in the country, as happened in the autumn. Therefore, in his opinion, the members of the Constitutional Court bear responsibility for the events of October 1993.

Looking back, Filatov believes that the deployment of tanks near the White House, where the insurgent deputies of the Supreme Soviet were, was unnecessary.

“We feared that there would be many people around the White House who would come to protect it, but they all left, and by the time of the shelling there was almost no one left, only deputies and paramilitary bandits like the Barkashovtsy and the Terekhov group. Certainly, this was dangerous, but not enough to dispatch tanks and fire intimidating shots," he stressed.

Filatov added that, unfortunately, many people remember this as the bombardment of the White House, "and it is this that discredits the policy of the president these days."

Alexander Korzhakov, who headed the President's Security Service 25 years ago, in turn, considers that it was essential to deploy the tanks to give an “adequate response” to the anti-reform opponents, although he admits that there were too many casualties.

"The situation at the time was quite serious, those who lived through it, know what it was like… It was necessary to deploy tanks and respond to those who had stormed Ostankino the day before. I do not know what would have happened if we had not done that. When they assaulted Ostankino, 140 people, mostly innocent, died, and on the next day 10 more people were killed near the White House…" Korzhakov said.

Journalist Nikolai Svanidze, who was covering the autumn developments, revealed that Yeltsin was left with no choice but to issue Decree No. 1400 "On stage-by-stage constitutional reform in the Russian Federation" in order to prevent a civil war.

"I think that the victory of those people who sat in the White House, led by Khasbulatov, Rutskoi… it would’ve been terrible for the country if they won," Svanidze said.

Amnesty Instead of Trial

Yeltsin's supporters, who took part in the 1993 events, confessed that they regretted that the main instigators who called for a military solution to the conflict and the coup did not go on trial and were amnestied.

"If you reconsider those events, you do not have to condemn all of them, but I condemn three of them – Alexander Rutskoi, Ruslan Khasbulatov and Albert Makashov, who should have been judged: the death of people rests on their conscience," Korzhakov said.

Svanidze, in turn, recalled that many of the participants of the conflict later became public officials.

"All those who sat in the White House and resisted were immediately rehabilitated, many of them later took high government posts. Alexander Vladimirovich Rutskoi, who was like a shadow president in the White House, also later became governor of one of the regions…”