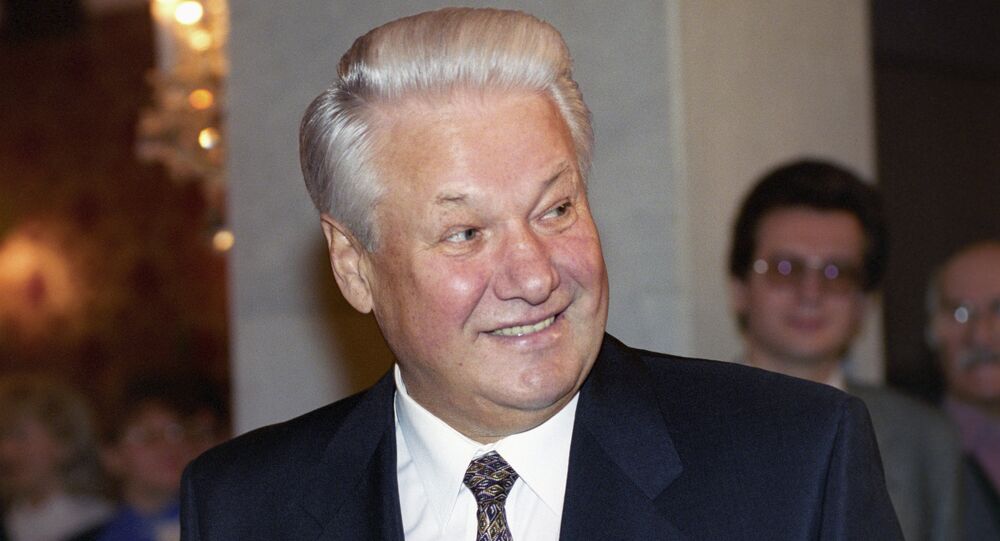 On July 10, 1991, Boris Yeltsin took office as President of Russia. While frequently hailed by Western leaders during his presidency and after his death as a liberal, reformist democrat, for a majority of Russians, his eight and half year presidency was an age of adversity and despair.

In August 1991, not long after taking office, Yeltsin — and the Soviet Union itself — faced a major challenge, in the shape of a coup launched by government hardliners. They sought to dethrone Soviet President and General Secretary Mikhail Gorbachev, and unravel his reform program and union treaty that decentralized much of the central government's power to the republics.

The Russian White House was surrounded by the military, but troops quickly defected in the face of mass popular demonstrations.

Yeltsin was subsequently hailed by his supporters around the world for rallying mass opposition to the coup, the image of him speaking defiantly from a tank a stirring emblem of the upstart's dedication to democracy.

10 July 1991. Boris Yeltsin took the oath of office as the first elected president of the Russian Republic. pic.twitter.com/xoUwjKKR5Z

In December that year, he suddenly, without legal or practical preparation or consultation with any of the parliaments or populations involved, abolished the Soviet Union.

In fact, the total fragmentation of the Soviet Union marked a profound departure from Gorbachev's principled commitment to social consensus and constitutionalism, echoing instead the Tsarist tradition of sweeping change imposed from above.

Early in 1992, Yeltsin launched his infamous, catastrophic "shock therapy" economic policy package — advocated and administrated by a group of US economists, primarily drawn from the ranks of Harvard, the approach was enthusiastically supported by the Clinton Administration and cheered by the Western media.

In the event, far from having a curative impact on the Russian economy, it plunged much of the country into poverty and disarray.

Under its auspices, price controls were abolished, creating surging hyperinflation which erased the savings of most Russian citizens — and most notoriously, the vast majority of previously state-owned industries was privatized.

Workers were subsequently given shares in the companies for which they worked, but their need to put food on their tables meant they had little use for them — instead, they sold their shares for far less than they were worth to a small group of entrepreneurs.

As a result, these individuals — who later became known as oligarchs — came to own the bulk of Russia's most valuable assets, running a virtual monopoly on the media and maintaining their position via close connections with organized criminal elements in the country.

Nonetheless, Yeltsin's reformist economic efforts are not without supporters. Some have argued the reforms were urgent and necessary, transforming Russia into a free market economy for the first time, and allowing the model that stands today — one with an effective tax system, privately owned property and flourishing private sector — to germinate.

Furthermore, the emergence of oligarchs may well have been inevitable — most emerging economies have struggled or are struggling with the same issue, as the stratospheric growth they enjoy is rarely doled out fairly, instead restricted to a limited elite.

In October 1993, engaged in a bitter dispute with parliament over his economic policies, Yeltsin opted to deal with the quarrel by dissolving the legislature and sacking all its members, despite not having the legal authority to do so.

Tanks once again thundered onto the streets of Moscow — this time, they were directed by Yeltsin, and aimed at Russian democracy.

As shells rained down on the Russian White House, Parliament impeached Yeltsin and proclaimed Vice President Aleksandr Rutskoy to be acting president — in response, Yeltsin ordered the military to storm parliament and arrest resisting legislators.

The ten-day conflict became the deadliest single event of street fighting in the Russian capital's history since the Russian Revolution — some estimates suggest as many as 2,000 died.

Subsequently, Yeltsin destroyed the entire constitutional order of the Russian republic, Western governments and media again cheerleading developments every step of the way.

Come the June 1996 presidential election, Yeltsin's popularity was at an absolute nadir. His cataclysmic record on the economy — many workers had become accustomed to going unpaid for months — and troubling attitude to democracy and the rule of law, had precipitated a resurgence in the popularity of the Communist Party, and many analysts believe their candidate Gennady Zyuganov could prevail.

In response, Yeltsin's oligarch associates raised vast sums of money to ensure he retained office, and used their media assets to relentlessly support the government, while spreading disinformation and slander about Zyuganov.

Despite Russian electoral law limiting campaign spending to US$3 million for each candidate, estimates of Yeltsin's campaign budget range from US$700 million to US$2 billion. An even larger sum was made available indirectly by the West, with the International Monetary Fund granting a US$10.2 billion loan to Russia that enabled the embattled government to throw huge sums at recompensing paying long-owed back wages and pensions to millions of Russians — some overdue wages arrived just before (or indeed on) June 16, polling day.

In the event, Yeltsin won with 54.4 percent of the vote — although there are suggestions of electoral fraud in the polling process. For instance, some results showed highly unlikely changes in voting patterns between the two rounds of voting, and there were reports of ballot box stuffing. Not long after the election, Yeltsin's government devalued the ruble, defaulted on its international debts and froze private bank accounts, expropriating citizen's savings in order to pay off its obligations.

In the end, Yeltsin's greatest achievement may well be his last — the enthusiastic clearing of the path for Vladimir Putin's ascent to the presidency.

On August 9, 1999, he appointed Putin one of three First Deputy Prime Ministers, and acting Prime Minister of the Government of the Russian Federation, announcing he wished to see Putin as his successor. His unexpected resignation on December 31 that year allowed Putin to become acting president, who subsequently won the March 2000 in a landslide.

In turn, Putin's greatest achievement may well be his systematic and successful undoing of the untold social, economic and political damage wrought on Russia by the Yeltsin years. During his first presidential run, the country's economy grew for eight straight years, and GDP measured in purchasing power increased 72 percent.

As of 2017, Russia stands firm, its dignity and strength restored, its international prestige cemented. Nonetheless, when Yeltsin passed away of congestive heart failure in April 2007, few if any mainstream media commentators acknowledged the worst chapters of his presidency — much less Putin's pivotal role in righting them.