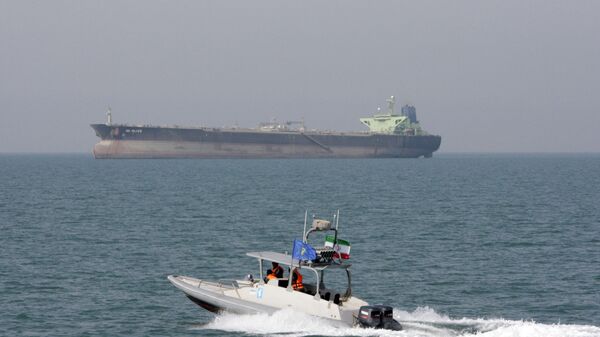 © AP Photo / Vahid Salemi
Subscribe
International
India
Africa
Patrol boats belonging to Iran's Revolutionary Guard Corps have closed in on Americans in the Strait of Hormuz that handles nearly one-third of the world's sea-borne oil trade. This comes as Iran-US relations are spiraling downward, not least due to crippling economic sanctions Trump slapped on the Islamic Republic earlier this year.

Iranian TV has aired footage showing a close encounter between Revolutionary Guard speedboats and the US Navy's aircraft carrier USS Theodore Roosevelt in the Strait of Hormuz.

The footage was purportedly shot on March 21 in the Strait of Hormuz, a key shipping waterway linking the oil-rich countries of the Persian Gulf with the open ocean, which sees a third of the world's sea-borne oil passing through it every year. In the video, Revolutionary Guard speedboats can be seen approaching the US aircraft carrier, while Iranian sailors warn the Americans over radio communication against threatening or using force "in any manner."

Rising Heat in the Persian Gulf

The footage was broadcast at a time of particularly strained relations between Washington and Tehran, with the Iranian economy suffering a decline under US sanctions related with its nuclear activity.

In May, Donald Trump pulled America out of the landmark Iran nuclear deal between Tehran and world powers, claiming that the "poorly negotiated" agreement allowed Iran to reach the brink of a nuclear breakout.

He went ahead crippling economic sanctions on Tehran and companies doing business with it, prompting a withdrawal of investors from the Iranian market. Washington's oil sanctions on Iran, which are set to resume on November 4, have already led to a sharp drop in Iran's oil exports: according to Forbes, the country's crude sales dropped by a whopping 62 percent since May.

This has put a significant strain on safety in the Persian Gulf. In July, Iran warned that it would shut down the Strait of Hormuz over renewed US sanctions.

The US 5th Fleet, which is currently deployed in the Persian Gulf, has reported multiple confrontations with Iranian forces in recent years. In one of the latest encounters, an unarmed Iranian drone shadowed a US aircraft carrier on the night of August 24, 2017. Two weeks earlier, the same type of drone came close to a US fighter jet while it prepared to land on an aircraft carrier, forcing the pilot to change course.

On July 25 last year, the patrol ship USS Thunderbolt fired warning shots at an Iranian patrol boat in international waters, because it reportedly came to close to US vessels and refused to change course.