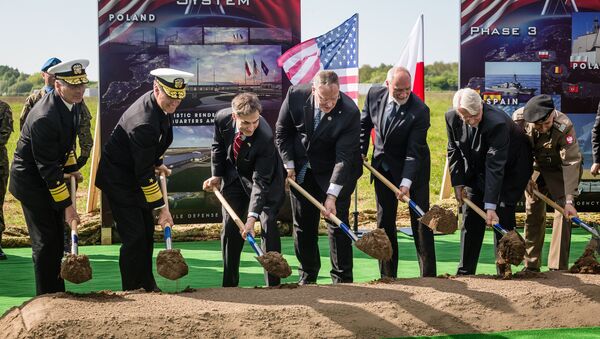 Poland is ready to pony up as much as $2 billion for the deployment of a permanent US military base in the country, according to the country’s defense ministry.

Polish Defense Minister Mariusz Blaschak outlined the prospect during a visit to Washington.

Why is Poland Hosting a US Military Base 'Not the Best' Option?
According to him, negotiations are underway on possible supplies of US arms to Poland. Expansion of military cooperation will also be discussed when the Polish and US presidents, Andrzej Duda and Donald Trump, meet in Washington on Tuesday.

Experts note that in its desire to get the status of "America's main ally in Europe," Warsaw is ready to give up its military sovereignty and even finance the creation of a US base, despite the serious economic problems the country is now grappling with.

During a meeting on Friday with congressmen, including the chairman the House Armed Services Committee, William Thornberry, Blaschak said that the US military presence on NATO’s eastern flank contributes to the strengthening of security not only of Poland, but the region as a whole.

"We are pleased that representatives of the Congress and the US administration expressed support for the strengthening of US presence in Poland, although this process requires a lot of coordination," he noted.

He mentioned “a real possibility” of a US military base appearing in Poland on a permanent basis and added that Warsaw is ready to pony up as much as $2 billion for its construction.

Warsaw consistently supports the expansion of the US military presence in Poland, which currently hosts a US tank brigade, deployed on a rotational basis, and a 1,000-strong NATO multinational battalion.

The US military base would be set up near Bydgoszcz or Torun, due to their proximity to the naval base and port in Gdynia.

Warsaw justifies the need for a permanent US military presence in the country by the "growing threat from Russia."
Until now, US officials have been cautious about the prospects of deploying an American military base in Poland.

In an interview with RT, the director of the International Institute of New States, Alexei Martynov said that Warsaw is ready to invest a considerable amount in the construction of the military base, while Poland has found itself in dire economic straits and is getting subsidies from the European Union.

“A poor population, neck-deep in debt, sluggish industry, etc. And still, the Polish leaders from the Law and Justice party, the parliamentary majority representing the very same party and President Duda, do not want to solve the problems facing the country. All they want is to toe Washington’s line,” Martynov said.

“Poland is giving up its military sovereignty, which is part of state sovereignty,” he added.

Andrei Koshkin, a military political scientist and head of the Department of Political Science and Sociology at the Plekhanov Economic University in Moscow, said that Poland constantly invites US troops into its territory, including the transfer of military equipment and the holding of exercises.

"Poland is at the forefront of countries who would like to actively interact with the US in the military sphere. Moreover, Poland constantly makes its territory available for US troop deployments,” Koshkin said.

He added that neither Warsaw nor Washington make any secret of the fact that such military activity is aimed at "containing Russian aggression.”

In this regard, Moscow is compelled to adequately defend itself.

"The Polish people are becoming hostage to US adventurism. Both Polish society and the current leadership need to know that creating such [military bases] they immediately become the target of a neutralizing strike by Russia,” Koshkin warned.

In an interview with Sputnik, Konrad Renkas, a Polish political analyst and vice-chairman of the Zmiana party, described this as yet another aggressive gesture against Russia and against any attempts to ease tensions between Europe and the Russian Federation.

READ MORE: Permanent US Base in Poland Only in Interests of US 'War Hawks' — Politician

“And it is a very, very big threat to peace in the world, especially in Central Europe, in the region of Ukraine and, of course, the Baltic States,” he added.

NATO has been significantly increasing its presence in Eastern Europe after the eruption of the Ukrainian crisis in 2014, using alleged Russian interference in the Ukrainian internal affairs as a pretext.

Moscow has repeatedly voiced its protests against  NATO’s military buildup, saying that the move will undermine regional stability and result in a new arms race.