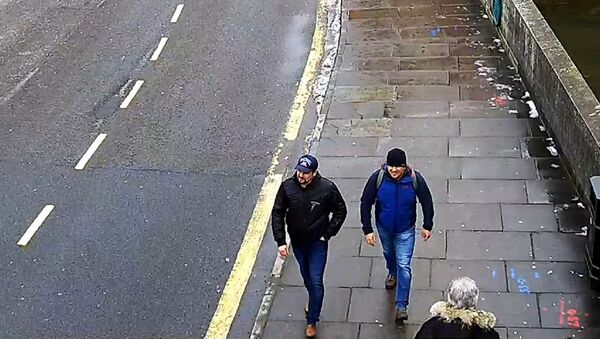 © REUTERS / Metroplitan Police
Subscribe
International
India
Africa
On Wednesday, London's Metropolitan Police released photos of two Russian nationals identified as Alexander Petrov and Ruslan Boshirov, who are accused of being responsible for the March 4 poisoning of the Skripals in the UK town of Salisbury.

In an interview with Russia's Izvestia newspaper, the niece of former Russian intelligence officer Sergei Skripal said that she remains "skeptical and partly ironic" about London's latest allegations about the two Russian nationals being involved in the alleged chemical weapons attack on Skripal and his daughter Yulia in Britain earlier this year.

"They [UK police] certainly need to allege more on the matter, while [British Prime Minister] Theresa May needs somehow to rehabilitate herself before the parliament. After all, six months had passed since the poisoning [of the Skripals]," Victoria Skripal pointed out.

She wondered why "Britons did not announce it earlier, given that they allegedly knew about all this so well."

Victoria also rejected investigators' version of the two Russians using fake passports to arrive in London, adding that the photos of the suspects "could be processed in Photoshop."

She said that "a man with a mustache is very similar to every third such person in Russia" and that "now everyone is walking with a beard and a mustache."

"After the photos were published, they [police]  immediately said that the names were fictional. One cannot trust the photos. We are invited to take their word for it, but we cannot believe the word, because we have been deceived more than once as far as the Skripal case is concerned," Victoria emphasized.

She confirmed her desire to arrive in the UK, expressing surprise about the fact that British authorities are still reluctant to allow her to do so.

"Today, [UK Prime Minister] Teresa May said that she has no claims against the citizens of Russia. Dear Mrs. May, if you have no such claims, why do not you let me, a simple Russian citizen, go to the territory of your country to meet people who have fallen into a difficult life situation? Especially given that these people are my family," Victoria noted.

She added that she last contacted Yulia on July 24 and that "we have not seen Sergei Viktorovich [Skripal] for six months or so."

The interview came after the Russian Foreign Ministry said in a statement that May's recent speech in the UK parliament on the Skripal case "has an absolutely unacceptable tone".

During the speech, May, in particular, said that the British government had concluded that the two individuals named by the police and the Crown Prosecution Service (CPS) were officers from the Russian military intelligence service, also known as the GRU.

Russia
Sergei Skripal's Niece Claims She Got in Touch With Yulia Skripal
Earlier, the CPS said that they had sufficient evidence to charge two Russian nationals, Alexander Petrov and Ruslan Boshirov, with involvement in the March 4 nerve agent attack on the Skripals.

In June, the Skripals were discharged after they were hospitalized as a result of an alleged nerve agent poisoning in the UK town of Salisbury. The current whereabouts of Sergei and Yulia remain unknown as the Russian embassy suggests that the Skripals could have been manipulated.