Don't 'Act Like a Lady': US School Reportedly Drops 'Sexist' Quote Amid Backlash 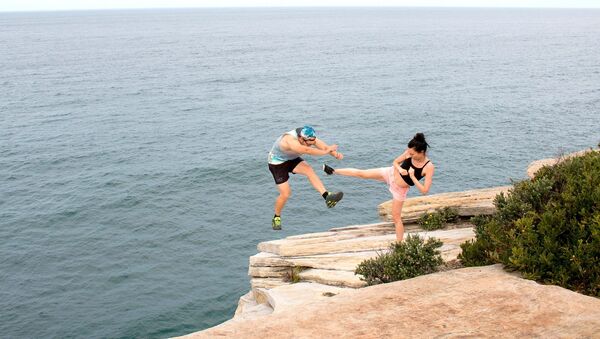 The caption’s “sexist” quotation hadn't drawn much attention until someone posted it on social media and spread it under the #MeToo hashtag. Under pressure from the public, the school was forced to replace the quote with another, now by a Nobel Prize laureate.

A scandal broke out on social media after a Twitter user posted a photo of Gregory-Lincoln Middle School in Houston with a quote caption on one of its walls, which the author of the tweet branded "sexist, misogynistic, and discriminatory." The quote read "the more you act like a lady, the more he'll act like a gentleman."

This is the wall at Gregory-Lincoln Middle School in Houston ISD.
It's perpetuating horrible gender stereotypes, shaming women, and relinquishing boys of all responsibility. It's sexist, mysogonistic, and discriminatory!

According to the user, the quote, attributed to Sydney Biddle Barrows, also known as Mayflower Madam — the founder of the New York escort service, shamed women and relinquished men of any responsibility for their misconduct.

The tweet, which gathered 25,000 likes and 9,500 reports, prompted school authorities to replace the quote caption with another one — this time by Nobel Prize laureate Malala Yousafzai.

Ah yes. Another impossible responsibility to heap on our girls. How about boys behave like gentlemen no matter how another acts towards them? It’s called character.

No. I am not responsible for “his” behavior. He is.

I hope this isn't real.

Still, despite the widespread backlash against the caption at the school, many twitterians blasted those offended by it, suggesting that they are looking for a tempest in a teapot

Id put my life savings that if you were to flip it around and it were to say “The more you act like a gentleman the more she’ll act like a lady.”, y’all wouldn’t have a problem with this. Quit being senseless snowflakes and find a real problem to discuss.

I am Horrified, that anyone is "Horrified" about this
If it read: "Act with Dignity and Respect, and others will Reciprocate"
Would you respond differently? That is what it says but it includes gender.
Perhaps people should stop reading more into this, and take it a face value.

or are overthinking the quote's meaning.

All the quote (which is by a Sydney Barrows, who I guess is now "sexist") is saying is that chivalry is bilateral, and both men and women are responsible for acting in a decent chivalrous manner.

There is a subliminal message there telling the boys to act properly. If anything maybe this message is unfair to them. Since it requires them to think outside the box. But the message is there.

Some even said that the quote is not that far from the truth and is actually worth considering.

I feel alone in raising my daughter to act like a lady and my son to act like a gentleman. It seems like the school had good intentions. It just came out wrong. Good thing the PC control was on top of this. Long live booty shorts, vagina costumes, and trashy girls. #OverOffended