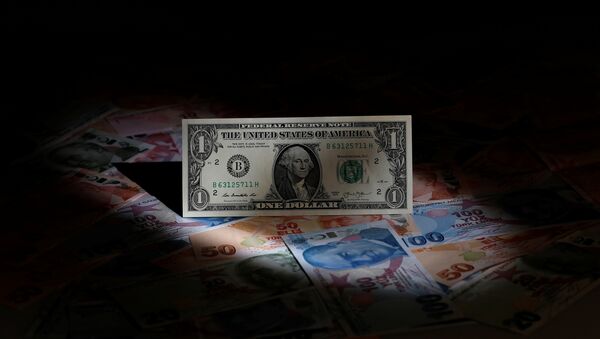 Officials in the Turkish government and central bank are taking steps to stabilise its ailing currency, the lira, as the ongoing diplomatic standoff with the US has impaired investor sentiment and spurred capital outflows from the country.

Kristian Rouz — Turkey's government is taking further steps to reassure investors and consumers, saying the ongoing diplomatic tensions with the US don't pose significant long-term risks to the economy. The Finance Ministry said the nation's financial system will likely remain stable despite the currency fluctuations of the past few days.

Berat Albayrak, the Finance Minister of Turkey, said political risks to the nation's economy or the financial system won't have a big impact on growth and national development. He stressed that Turkey's national debt and household debt levels are low compared to world standards, which would allow the government to maintain financial stability in the longer run.

"We do not see a big risk about Turkey's economy or financial system," Albayrak said.

The Finance Minister's comments come amid ongoing, coordinated efforts by the Turkish Central Bank and the government to stabilize Turkey's national currency. The lira has faced heightened downward pressure after US President Donald Trump pointed out that relations between the two countries are "not good at this time."

The move is seen as providing the economy with cheaper financing — a form of monetary stimulus aimed at offsetting the capital outflows triggered by Trump's comments.

"In the light of recent evaluations, the CBRT (Turkish Central Bank) has decided that, effective August 29, 2018, the banks' borrowing limits for overnight transactions at the Interbank Money Market established within the CBRT will be twice the limits applicable before August 13, 2018," the central bank said in a statement.

However, the central bank's move is seen as contributing to the lira's weakness — as the volume of dollar financing in the Turkish economy has remained the same, while the additional lira-denominated financing might have tipped the balance.

The Turkish currency has lost roughly 40 percent of its value this year, and the devaluation has taken place in two waves. The first stage occurred several months back when the US Federal Reserve's increase in interest rates triggered mild currency crises in select emerging markets. These included Turkey, Argentina, and South Africa, amongst others at the time.

However, the current wave of devaluation in Turkey is stemming from the deteriorated investor sentiment; some are expecting US sanctions amidst the ongoing diplomatic row.

International credit rating agency Moody's said earlier this week Turkey's banking sector is exposed to heightened risk — contrary to the Finance Minister's statement. Moody's said it expects a possible deterioration in financing amid a decreased influx of hard currencies into the Turkish economy.
The agency also downgraded the credit ratings of 20 Turkish lenders and other financials.

"The downgrades primarily reflect a substantial increase in the risk of a downside scenario, where a further negative shift in investor sentiment could lead to a curtailing of wholesale funding," Moody's said.

Additionally, a separate report has shown Turkey's investor confidence dropped to its lowest since March 2009 — when the onset of the global economic crisis crippled foreign revenues of the majority of Turkish firms.

Erdogan Urged Turks to 'Combat Attacks on Economy' Amid Row With US
Turkish companies have exported consumer goods, such as clothing, to the rest of Europe for decades, with the lion's share of trade denominated in euros and US dollars. However, the diplomatic spat with the US has jeopardized Turkey's place in the international dollar economy.

While Ankara has sought trade in national currencies with some of its trading partners, it has also expected to maintain its trade ties with the Eurozone despite the tainted relations with the US.

It is not immediately clear whether such plans will succeed, but the currency volatility reflects investor confidence in Turkey's ability or willingness to negotiate a mutually beneficial solution with the US.