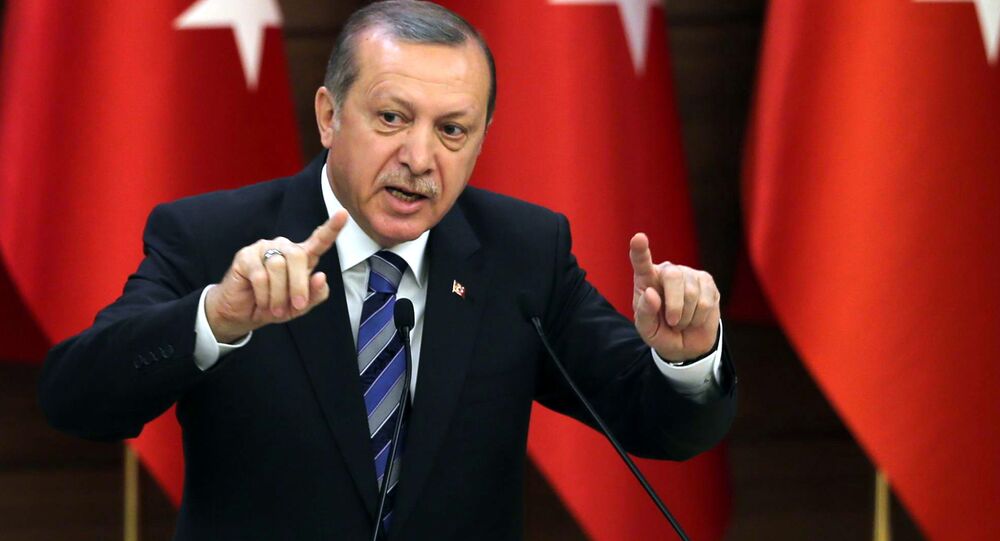 Turkish President Recep Tayyip Erdogan announced earlier this week that his country will boycott US electronic goods in response to unfriendly US trade moves. He said that "they have iPhones but on the other hand there is Samsung" and that Turks can also use the local brand Venus Vestel.

Number of Iphone Purchasers Has Not Decreased

Speaking on condition of anonymity, a salesman from one of Ankara's mobile phone outlets told Sputnik that "both prices and a balance of purchases [in the city] remain unchanged" and that three out of ten customers are still interested in buying an iPhone, while the remaining seven customers prefer Samsung models and those made by other manufacturers.

At another outlet, a cashier, who also spoke on condition of anonymity, suggested that in Turkey, iPhones are used by either rich businessmen or those who are ready to part with their last money to buy an iPhone in order look a well-to-do person.

READ MORE: US to Slap New Sanctions on Turkey if It Refuses to Release US Pastor — Treasury

"Look at me, I'm not a poor man but I use a Samsung, which is not the case with those young guys collecting scrap waste who have iPhones. We are such a strange nation!" the cashier said.

One of the young customers of the outlet named Batuhan said, in turn, that he dislikes iPhone models because he is "completely dependent on the actions of the manufacturer" when it comes to using the gadget.

"But I am against the state, not me, deciding on what brand of a mobile phone people should use and what brand they should give up," Batuhan said.

He also remained skeptical about a series of clips in the social networks which showed Turkish citizens destroying iPhones with sledgehammers – actions described by Batuhan as "pointless."

Erdogan's Call is All About Emotions — Customer

A middle-aged customer named Ali believes that Erdogan's call to abandon the US-made electronic goods is more emotional than real.

"The turnover of funds in the Turkish electronics market amounts to millions of dollars, and swiftly pulling the plug will mean a full-fledged economic blow to mainly domestic entrepreneurs. No one seeks to implement this task, Ali pointed out.

He suggested that "the President appealed mainly to the Turkish people who could express their dissatisfaction with actions of the United States in relation to our country."

READ MORE: US Contradicts Its Alliance With Turkey on Fundamental Security Issues – Ankara

"Roughly speaking, if one million iPhones have been sold in Turkey in the past, now, if people decide to boycott the brand, sales may drop to 500,000," Ali claimed.

Ankara taxi driver Deniz, for his part, said that even though he prefers to use a Nokia, an iPhone is also a must-have for him because it helps him navigate a route during work.

Self-described retired engineer Orhan said that although he is not going to get rid of his iPhone, he would not have bought it now, given the gadget's current price tag.

"As far as I know, in terms of the number of the phones that have been sold the, iPhone occupies 7 percent of the market, but in terms of money iPhone accounts for 26 percent. These phones are very expensive for people to buy. Most Turks buy Samsung models, which occupy more than 50 percent of the country's market," Orhan explained.

A young man named Guven, for his part, made it plain that he was initially against buying the iPhone and other Apple products, because he dislikes "America and the imperialists."

I do not even buy Coca-Cola and try to get by with products that are not of American production," Guven, who is going to tie the knot soon, said.

He was echoed by his bride Idil, who said that despite the fact that she had an iPhone, she is "very disappointed with it because Apple is constantly updating my gadget without asking my permission."

READ MORE: 'US Addiction to Sanctions Knows No Bounds' — Iran on Measures Against Turkey

"The phone's quality is deteriorating despite update packages and I'm outraged about iPhone owners making customers constantly buy something. I will never buy Apple products again, but Erdogan's call has nothing to do with all this, Idil concluded.

Earlier this week, President Erdogan accused Washington of conducting an economic coup against Turkey after US President Donald Trump authorized a doubling of tariffs on steel and aluminum imports from Turkey.

© AP Photo / Evan Vucci
US Sanctions on Turkey to Have 'Far-Reaching Consequences' for NATO Allies - Analyst
The exchange rate of the lira took a nose dive, losing it more than 16 percent against the dollar;'' it  plunged to an all-time low following Trump's announcement.

The US previously slapped sanctions on two Turkish officials over alleged human rights violations after Ankara refused to release American pastor Andrew Brunson, who is accused by Turkey of being involved in the movement of Fethullah Gulen, a cleric living in the US and believed by Erdogan to be behind the failed 2016 military coup against him.