US Sanctions Suppress Journo Pushing Back on ‘Corporate Tyranny’ 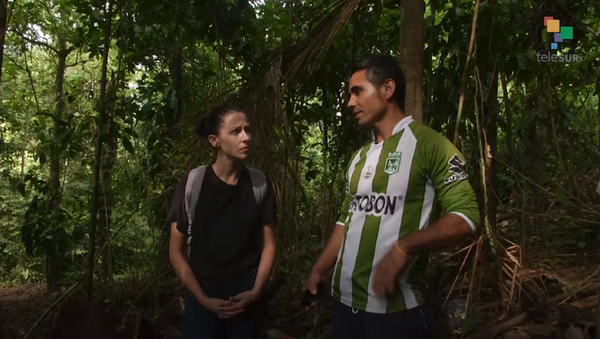 “As a result of US sanctions against Venezuela, ‘The Empire Files’ has been forced to completely shut down operations,” read an ominous statement from the hit TV documentary series hosted by journalist Abby Martin on Wednesday.

Martin used "The Empire Files" to travel the world and report on major hotspots of political conflict, breaking through mainstream narratives and telling the complicated truth in a way that was easy to understand. The program, which ran on TeleSur, was mostly funded by the Venezuelan government and its allies.

The YouTube page boasts nearly 100,000 subscribers and more than 4.5 million views on its videos. In videos on the page, Martin interviewed teenage Palestinian icon Ahed Tamimi — before she was sentenced to eight months in prison for slapping an Israeli soldier who was on her property — and reported from the front lines of protests and environmental catastrophes.

But last Wednesday, Martin and her producer Mike Prysner had to cease production "just after we hired a stellar team of journalists in Gaza who sent us incredible, unseen footage & interviews from the Great March of Return," Prysner tweeted. The Great March of Return protests have been met with grave repression from the Israeli military, which has killed more than 171 demonstrators and thousands injured, according to Gaza Health Ministry.

"We're living in a pretty abysmal state of journalism right now, where to challenge this corporate tyranny and imperialist regime change narratives from the US empire, you have to go outside that corporate media apparatus, and that's really hard to do, and get funding for that," Martin told Radio Sputnik's Loud & Clear.

There have been many attacks against Venezuela and TeleSur, Martin noted, including then-President Barack Obama declaring in 2017 that Venezuela posed a national security threat to the United States, which Martin added was "maybe because they have the largest oil reserves in the world."

But it didn't escalate to the point of taking aim at Venezuelan-supported media until "after the democratic reelection, that landslide reelection of [President Nicolas] Maduro, back in May. Of course, the Venezuelan people were punished for choosing the ‘wrong leader,' quote unquote, that the US empire didn't want. So they slapped inordinate sanctions against them that you have not seen in the region since Nicaragua in the 1980s, when we were waging a full-blown bloody war against the Nicaraguan people," Martin said.

Despite Washington's line, sanctions don't just affect the ruling party but the "poor, vulnerable, working class people — affecting food and medicine from getting to the poorest people of Venezuela," she said.

Collateral damage from that, Martin added, was "seizing the ability for TeleSur to pay any contract journalists, and that's been the result of the last six months… we have not been able to receive payments in and out of Caracas, and not just Caracas, but every single other allied country that links up with TeleSur, so the US government has completely disabled TeleSur's ability to pay journalists and to receive funding or loans, of course, from outside of the country."

The acclaimed journalists aren't giving up. After the pair announced a GoFundMe to help keep the show afloat, hundreds of people donated, and even more voiced their support.

Feature film and documentary director Oliver Stone said that Martin and her team are "dedicated to bringing us insightful news that is not available on normal American outlets. Her dedication to the truth cannot be overestimated. It is crucial that we keep this show alive."

Martin pointed out to Loud & Clear host Brian Becker and Sputnik News' Walter Smolarek, who filled in for John Kiriakou, that the closure of her show benefits the same people whom it was started to push back against.

"This is a kind of a back-handed attempt, a happy circumstance, for the Trump administration, because TeleSur is one of the few programs that is really challenging his corporate media hegemony, which is why TeleSur was created in the first place, as a joint project of Fidel Castro and Hugo Chavez — to challenge that regime change narrative that was assaulting their countries and trying to overthrow their leaders."