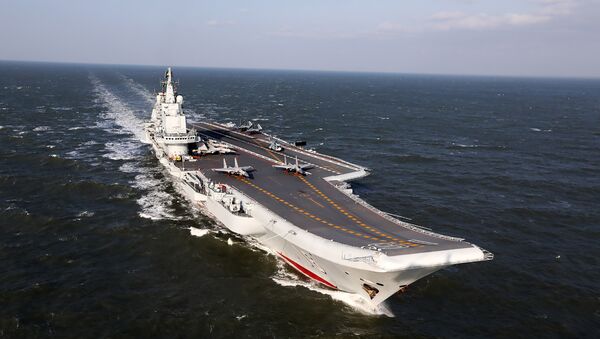 © AFP 2023 / STR
Subscribe
International
India
Africa
If China’s refurbished Liaoning aircraft carrier makes a voyage encircling Taiwan, leaders in Taipei should consider responding by conducting a simulated attack on the carrier, according to the former US director of national intelligence.

If the carrier sails around Taiwan, "Taiwanese forces should take advantage of its presence to conduct simulated attacks against the Liaoning, raising their own readiness and demonstrating the reality that the Liaoning is vulnerable under wartime conditions," ret. US Navy Adm. Dennis Blair wrote in an August 22 post for Sasakawa Peace Foundation USA.

Blair was the third director of national intelligence under former President Barack Obama. He served at the post before from January 2009 until May 2010 when he resigned in protest of bureaucratic hassles within the White House.

The People's Liberation Army-Navy's Liaoning cruised around Taiwan in March and last fall, Taiwanese officials said at the time.

To be clear, China's peacetime flights and sea missions near Japan and Taiwan have not been illegal. Once the perceived threats are registered, Japanese or Taiwanese aircraft generally mobilize, rendezvous with the Chinese aircraft or ships and then escort them through their Exclusive Economic Zones, Air Defense Identification Zones or territorial waters and airspace.

The former presidential adviser said that Japanese and Taiwanese responses provide the PLA with an opportunity to gain intelligence insights about the two nations' "surveillance and reaction capabilities, insights that can be used to the PLA's advantage in combat operations."

While Washington may not be interested in seeing relations between Japan and China thaw, a Chinese researcher told Sputnik China earlier this year, Japanese Prime Minister Shinzo Abe made a long-awaited visit to China in May. The two sides agreed to improve trade and financial relations, Sputnik reported, and about a week ago the two countries' governments were reported to be considering the resumption of bilateral currency swaps.

With respect to Taiwan, Beijing has long considered administration over the island part of China's political destiny. When reports surfaced in July that a US Marine contingency might be stationed at the new de facto US embassy in Taiwan, a Global Times op-ed toyed with the possibility of China launching an all-out invasion in retaliation. Beijing is not keen on such US personnel in Taiwan, the op-ed noted, depicting the deployment as a "subversion of the one-China policy." Taiwan, under the presidency of Tsai Ing-wen, has refused to endorse the idea that the self-governing nation is in fact part of "one China," and tensions have increased since she took office in 2016.