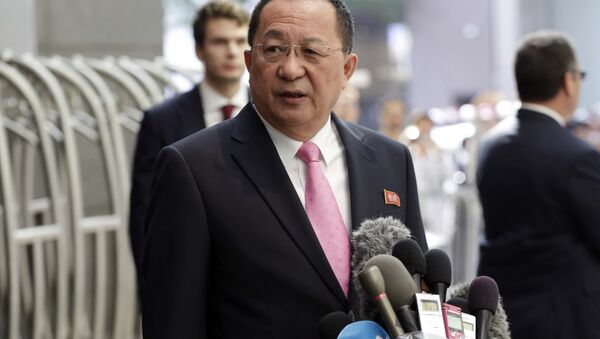 © AP Photo / Richard Drew
Subscribe
The North Korean Foreign Ministry accused “high-level officials within the US administration” of “going against the intention of President Trump to advance the DPRK-US relations” in a statement Thursday. Meanwhile, the socialist state renewed calls for a permanent peace treaty so that “a mood will be created for creating trust."

The press statement, carried by Korea Central News Agency, laid out the position of the government of the Democratic People's Republic of Korea (DPRK), the official name of North Korea, on the burning question of peace on the Korean Peninsula: US President Donald Trump wants peace, but the agreement reached in Singapore in June is being sabotaged by other US state officials.

"We hoped that these goodwill measures would contribute to breaking down the high barrier of mistrust existing between the DPRK and the US and to establishing mutual trust," the statement said. "However, the US responded to our expectation by inciting international sanctions and pressure against the DPRK."

"The US is attempting to invent a pretext for increased sanctions against the DPRK by mobilizing all their servile mouthpieces and intelligence institutions to fabricate all kinds of falsehoods on our nuclear issue. They made public the ‘North Korea Sanctions and Enforcement Actions Advisory' and additional sanctions, and called for collaboration in forcing sanctions and pressure upon us even at the international meetings," the statement continues.

"Now the issue in question is that, going against the intention of President Trump to advance the DPRK-US relations, who is expressing gratitude to our goodwill measures for implementing the DPRK-US joint statement, some high-level officials within the US administration are making baseless allegations against us and making desperate attempts at intensifying the international sanctions and pressure. Expecting any result, while insulting the dialogue partner and throwing cold water over our sincere efforts for building confidence which can be seen as a precondition for implementing the DPRK-US joint statement, is indeed a foolish act that amounts to waiting to see a boiled egg hatch out."

The North Korean Foreign Ministry statement further accused the US of clinging "to the outdated acting script which the previous administrations have all tried and failed," meanwhile noting that the country remains "unchanged in our will to uphold the intentions of the top leaders of the DPRK and the US and to build trust and implement in good faith the DPRK-US joint statement step by step."

"The US should, even at this belated time, respond to our sincere efforts in a corresponding manner."

On August 3, the US Mission to the UN submitted proposals to the UN Security Council for the imposition of new sanctions against North Korea, Sputnik reported. That same day, a six-month report by independent experts monitoring the implementation of UN sanctions was submitted, which accused North Korea of violating economic sanctions placed against it by exporting textiles goods to a number of countries, among other infractions.

"[North Korea] has not stopped its nuclear and missile programs and continued to defy Security Council resolutions through a massive increase in illicit ship-to-ship transfers of petroleum products, as well as through transfers of coal at sea during 2018," the 149-page report, which was viewed by Reuters, said.

The US Treasury Department's Office of Foreign Assets Control has also placed new sanctions against a North Korean firm, Korea Ungum Corporation, along with a Chinese and a Russian corporation accused of doing business with them in violation of sanctions, on August 3, Sputnik reported.

The June 12 meeting between Trump and North Korean leader Kim Jong Un secured a number of agreements, including a promise to work toward a permanent peace treaty, dependent upon the fulfillment of other parts of the agreement — most importantly, denuclearization of the Korean Peninsula.

Both sides have taken some steps in that direction, with the DPRK returning remains of US soldiers who perished in their country during the 1950 to 53 Korean War and destroying a number of nuclear weapons and long-range missile test sites; and the US and South Korea placing a moratorium on provocative military drills that rehearse bombing and invading North Korea.

Nonetheless, the US has maintained the position that economic sanctions will not be lifted until "concrete steps" have been taken by the North Korean government toward denuclearization, such as providing a complete list of its nuclear facilities. "This is all in North Korea's court," US Ambassador to the UN Nikki Haley said August 8 during a press conference in Colombia.

The United States has not recorded "a complete shutdown" of nuclear materials' production in North Korea, US Forces Korea Commander Gen. Vincent Brooks said July 22 at an Aspen Security Forum panel, Sputnik reported. "Their production capability is still intact. Their testing capability we just saw affected a few months ago in the destruction of the Punggye-ri testing site, but production is a different question, so we haven't seen a complete shutdown of production yet."

US Director of National Intelligence Daniel Coats also voiced the opinion that it is unlikely that Pyongyang will dismantle its nuclear program within a year.

However, the DPRK's ruling Korean Workers Party (KWP) shot back on Monday, writing in a Rodong Sinmun editorial, "There have been outrageous arguments coming out of the US State Department that it won't ease sanctions until a denuclearization is completed, and reinforcing sanctions is a way to raise its negotiating power… How could the sanctions, which were a stick the US administration had brandished as part of its hostile policy against us, promote the two countries' amity?"

The North Korean government has also stepped up requests for a permanent peace treaty to the Korean War in recent weeks, with KWP newspaper Rodong Sinmun writing Thursday, "If the state of military confrontation between North Korea and the US is ended through a declaration ending the war, a mood will be created for creating trust."

"When the US enables us to trust the country and get close up, we will be able to open up to the US and show that through our actions," North Korean Foreign Minister Ri Yong Ho said at at the ASEAN Regional Forum in Singapore last week, The Korea Times reported.

While a ceasefire agreement ended active hostilities in July 1953 and established the Demilitarized Zone dividing North and South Korea, no permanent peace treaty was ever signed between the DPRK, South Korea and the US officially ending the war. Thus, in a technical sense, a state of war continues 70 years later, which severely limits the possibility of bilateral trade, movement between the countries and other normalized international discourse.

Meanwhile, Ri traveled earlier this week to Iran, Reuters noted, where Iranian President Hassan Rouhani warned him not to trust the US following Trump's unilateral withdrawal in May from the 2015 international agreement to lift sanctions in return for curbs on Iran's own nuclear program. New sanctions were placed against Iran's economy by the US on August 6.

000000
Popular comments
The bottom line is the U. S. President has to sign off on any bills or sanctions proposed by the American Congress. 'Chump trump' does NOT get a 'free pass,' based on the rationale that: 'It's was a decision of the U. S., Congress, and not me. I seek improved international relations.' Anyone who doubts the above, is either ignorant of how the U. S. Constitution outlines the functioning of the American system of government; needs a 'refresher' course; or lives in a fantasy world of 'deep state, 'swamp' boogeymen. The current awful states of relations of the United States with Iran, North Korea, China and the Russian Federation can ALL be directly blamed on the worthless ignoramus chump! And the chump has the audacity to continue to send mixed messages to all of these countries.