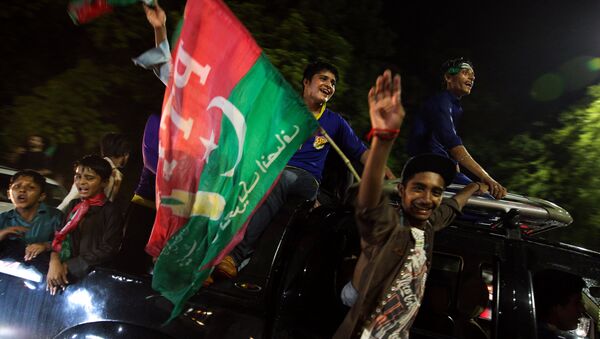 The vote for Pakistan's lower house of parliament, the National Assembly, marks only the second time in the country's history since 1947 that a civilian government has handed power over to another government.

Leader of the Pakistan's Tehreek-e-Insaf Party (PTI) Imran Khan, a former Pakistan cricket star, has claimed victory in the country's elections to the National Assembly on Tuesday.

"I want to tell the nation about the kind of Pakistan I want to see… I got into politics because I wanted Pakistan to become the country that Jinnah had envisioned. This has been a historic election. I especially want to thank the people of Balochistan, who despite terrorism came out in huge numbers to vote," Khan said in a victory speech broadcast by GEO.

In the wake of the vote, he pointed out that "democracy strengthened after the disputed vote" and pledged that his party will "run Pakistan in a new way."

The politician also vowed that poverty alleviation and the fight against terrorism would be the top priority of the government.

"We want to improve our relations with neighbouring countries," he said, noting that he would strive for peace in Afghanistan.

Explosion Hits Western Pakistan Amid Election: at Least 28 Killed (PHOTO)
"The leaders of Pakistan and India should sit down at a table and resolve the Kashmir issue," Khan stressed, adding that he wanted "trade ties" with neighbouring rival India.

According to the preliminary results, the PTI got 116 seats out of 272 in the National Assembly with the Pakistan Muslim League in second place with 58.