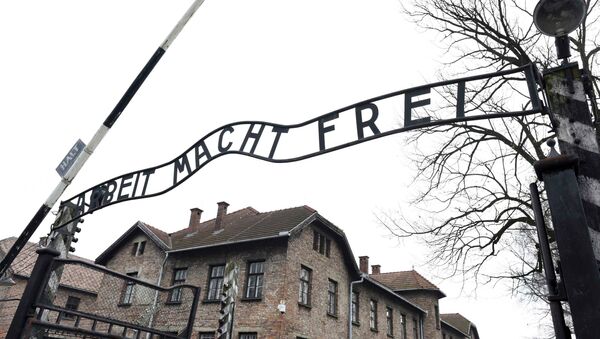 © REUTERS / Pawel Ulatowski
Subscribe
International
India
Africa
The two visitors from Hungary have been busted looting bricks from Auschwitz concentration camp, where over a million people were murdered and tortured by Nazis during World War II. According to the police, the wrongdoers didn’t anticipate the consequences of their actions.

A 36-year-old man and a 30-year-old woman have been fined $400 each and given a year in prison on probation for an attempt to lift bricks from the former Nazi death camp Auschwitz, which was built in German-occupied Poland.

The two Hungarian tourists were spotted as they were loading stones from the ruined crematorium at the memorial site, which once was the scene of some of the Nazi regime's most infamous crimes against humanity.

The security service was alerted and the police were called. They detained the wrongdoers, who admitted to the offence, according to the Polish police, as cited by the local news agency PAP.

The wrongdoers were charged with a theft of cultural assets, but stated that they didn’t recognize there would be consequences.

“They explained that they had wanted to bring back a souvenir and didn’t realize the consequences of their actions,” local police representative Mateusz Drwal stated, as quoted by the PAP.

It’s not the first time that visitors to the memorial have tried to steal something from Auschwitz-Birkenau, which was the largest Nazi death camp. It has become a symbol of the Holocaust; over one million Jews, Poles, Soviet citizens as well as resistance fighters were killed there by the Nazis between 1941 and 1945, when it was liberated by the Soviet Union's Red Army.

In 2015, two boys from the UK who were there on school trip, were sentenced to a year in jail on probation and a fine for taking buttons, a comb, and spoons which once belonged to the camp's prisoners. In 2009, Auschwitz’s ominous entrance sign, “Arbeit macht frei”(Work sets you free) was stolen. The thieves were then handed prison terms ranging from 18 months to 2 1/2 years. The three, identified as brothers Radoslaw M. and Lukasz M., and Pawel S. were "ordinary criminals" and there was no ideological basis for what they did, according to police reports.