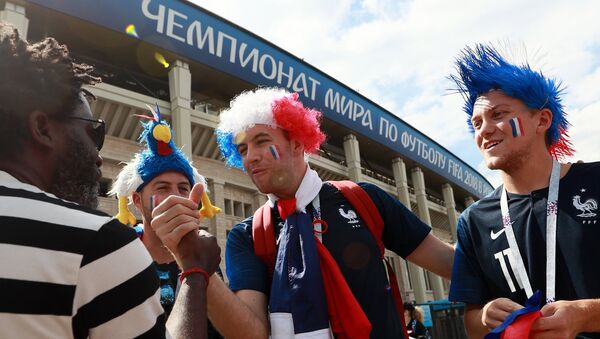 © Sputnik / Anton Denisov
/
Go to the photo bank
Subscribe
Players and fans alike have praised the friendly atmosphere and excellent organization of the 2018 World Cup which has been so helpful in breaking the stereotypes about Russia and proven that this country really is a place for fans from around the world.

“We have a helluva good time here and there are always things we can do,” said French defender Umtiti.

Halfback Matuidi is equally impressed with the time he has spent in Russia and has called the 2018 World Cup the best in his entire career.

“I’ve taken part in four international tournaments but nothing compares with what we have here. We are a young and agile team and the atmosphere here is absolutely amazing. We feel so good here that I could stay here for many more months,” Matyuidi admitted.

French Fans Speak About Their 2018 FIFA World Cup Experience
The French players talk of their mood and impressions from the tournament every single day, sincerely and using "words and expressions that do not mislead."

Although they have spent a month and a half "under the hood and away from their loved ones," they speak of their emotions "with a glint in their eyes," Le Figaro writes.

According to the newspaper, the 31-year-old Blaise Matuidi, who reflects on the completion of his career in the national team, is so impressed with the situation in the team that he may well want to "extend the pleasure."

France and Croatia will face off in the much-anticipated final game of the 2018 World Cup at Moscow’s Luzhniki stadium on Sunday.

FIFA President Gianni Infantino earlier praised the 2018 World Cup as the best in history and thanked Russians for their hospitality, and the organizing committee and the government for the ideal organization of the competition.