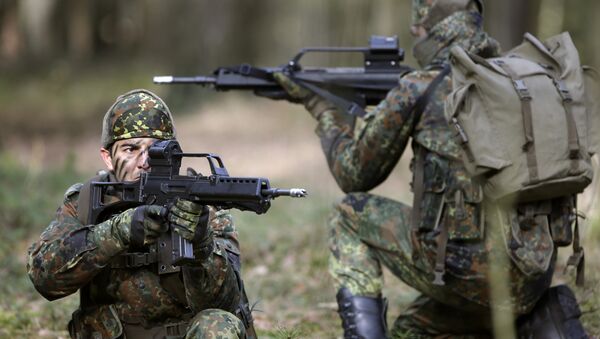 Kurdish Peshmerga militia units that moved out of Kirkuk following the September 25, 2017 independence referendum in the Kurdistan Regional Government in Iraq (KRGI) may soon be redeployed to disputed areas in the city, regional sources have told Sputnik.

The referendum increased tensions between the Peshmerga and the central government in Baghdad.

There have also been reports about Kurdish militia commanders being in talks with the US-led coalition and Iraqi government forces to resume their presence in Kirkuk.

Peshmerga Says PKK Has Not Left Sinjar, Raising Tensions With Iraqi Forces
The commander of the Peshmerga forces in Iraq, Xelil Shirvan, confirmed the reports in an interview with Sputnik.

“We have already reached preliminary agreement with the coalition and the Iraqi army for the Peshmerga units to return to Kirkuk and the disputed areas. Our command insists that Shia militia units move out of Kirkuk. We want Iraqi and KRG flags to be the only ones raised over Kirkuk,” he said.

“We are also proposing to the Iraqi government forces to set up a joint administration in the city. The Peshmerga forces will soon return to Kirkuk,” he added.

For his part, the Iraqi army’s joint operations commander, General Yahya Resul, said that “the Iraqi government and military command is fully authorized to conduct joint operations and sign agreements with the Peshmerga forces.”

“We deem it imperative to prevent terrorists from entering the region again and to this end we are ready to work together with the Peshmerga,” the General emphasized.

The Kurdistan Regional Government in Iraq (KRGI) is the official ruling body of the predominantly Kurdish region of Northern Iraq, also referred to as Iraqi Kurdistan and Southern Kurdistan.

An independence referendum for Iraqi Kurdistan was held on September 25, 2017, with preliminary results showing approximately 93.25 percent of votes cast in favor of independence.