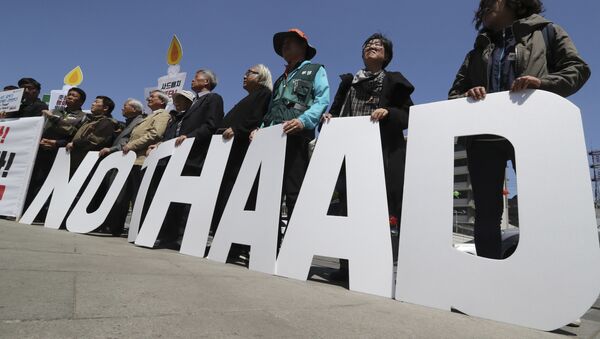 The talks between Pyongyang, Seoul and Washington, which have led to an unexpected move toward the end of hostilities on the peninsula, have been widely welcomed across South Korea. But as many Koreans welcomed the change of status quo, it has also reinforced their pressure against US missile defense.

The United States had a hard time placing its Terminal High-Altitude Area Defense (THAAD) systems on South Korean soil. The only apparent reason Washington had was the notorious North Korean nuclear threat. Now that North Korean leader Kim Jong Un has indicated his willingness to get rid of his country's nuclear weapons program, South Koreans have renewed their pressure on the unwanted US military presence.

The pressure itself is nothing new: inhabitants of Sesong-Ri, a town some four hours away from Seoul, have protested the THAAD battery located near their town from the very beginning.

For the past 680 days, around 200 villagers have been taking shifts around the clock to try to block US vehicles from travelling to the battery site, The Star reports. Following the North Korean talks, the town has erupted in protest activity.

"Take THAAD out, the North Korean nuclear threat is gone," reads a banner wielded by a group of some 40 elderly men and women. Behind them is a a wall painted "No Nukes, No THAAD."

​"Now the North Korean nuclear and missile threat has (abated) conspicuously. As it is declared that there will be no more war on the Korean peninsula, there is no reason for THAAD to be in my country," says Lee Jong Hee, a 61-year-old farmer, who leads a twice-weekly rally outside the THAAD battery.

US Mulls THAAD Missiles for India to Scrap S-400 Deal With Russia - Reports
Lee added that he hopes the system will be withdrawn in the next three months.

"How do North Korea and the United States begin peace talks without this war weapon being removed?" Lee asks.

The people of Sesong-Ri are afraid that the presence of THAAD makes their town a target for either North Korean or Chinese missiles in the event of war. In addition, they complain about the ever-present noise generated by the battery generators and constant shuttling back and forth by helicopters delivering fuel and supplies to the site.

"We can endure the physical exhaustion of coming to protests every day or occasionally clashing with police," said Kim Jong Hee, a 50-year-old from a nearby town of Gimcheon.

"The harder thing is how we have to live with the fact that we can't really stop this no matter how we resist physically," Kim added. "It's so agonizing because this is now the way people here have to live."

South Korea, North Korea Resume Maritime Communication Hot Line
The experts, however, are skeptical. Some say it's simply unwise to remove the missile defense before Pyongyang actually gets rid of its existing nuclear arsenal. Others, however, point to a more distant strategic concern: China.

"It was China, not North Korea, that was the most uncomfortable with the idea of deploying THAAD in South Korea," said Yang Uk, a military expert at the Korea Defense and Security Forum.

Beijing argued that THAAD and its powerful radar can see deeply into Chinese territory, upsetting the regional security balance.

However, according to the expert, the US can utilize Chinese anger for its own ends. By keeping THAAD in South Korea, the US will force China to maintain pressure on North Korea to denuclearize.

"THAAD can work as a leverage against China, because the more China cooperates with North Korea's denuclearization, the more likely they can say ‘goodbye' to THAAD," Yang says.

In March 2017, Beijing imposed unofficial sanctions on South Korean goods and banned group tours bound for South Korea, following Seoul's decision to accept the placement of THAAD on its soil.

However, Seoul doesn't seem to be in any rush to remove the unpopular system.

According to South Korea's presidential Blue House and the US Forces in Korea representatives, there have not yet been any discussions about the system's future following the Singapore summit. The only thing that seems to be happening is that Seoul's Defense Ministry is preparing an environmental study to assess how the missile defense system will impact the 70-hectare site granted to the US military to host the battery.