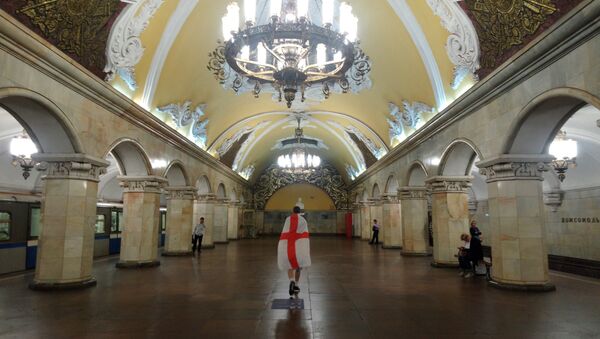 Maud Start
All materials
The beauty of the World Cup seeps far beyond the football pitch and into the strange and unique attractions of the hosting nation. Sputnik followed a die-hard England fan on his adventures through the sites.

"Live like a local" is a popular phrase these days, as the traditional tourist activities of hotels and landmarks are swapped-out in favor of B&B's and authentic experiences. Today, I've been tailing an England football fan around Moscow as he attempts to live like a local. Zander Walker, aged 26, from Birmingham, has travelled to Russia for the football, but he's also very keen on exploring his surroundings. He will be my "guide," and our first stop is breakfast.

As we reach the metro it is already quite clear that my guide for the day is far from a Russian local. Sticking out like a sore thumb with a St George flag draped round his shoulders, he stops to photograph the magnificent underground architecture of the Komsomolskaya metro station, before squinting at the Cyrillic metro map for directions.

An hour and a few wrong turns later, we arrive at our destination: The Izmailovo Kremlin. 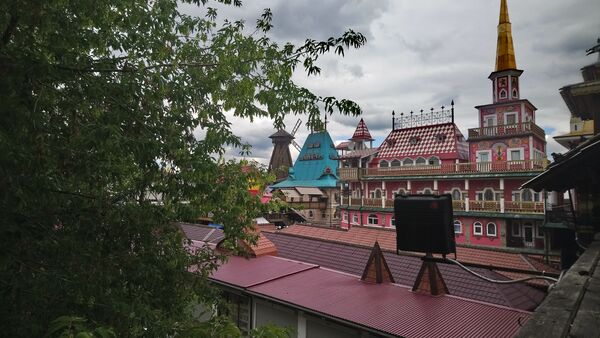 The word "Kremlin" is often used interchangeably with the "Russian State" in international politics. But "Kremlin" actually stems from medieval Russia, referring to a citadel, or fortress.

There are Kremlins dotted around Russia; in Novgorod, Pskov, Smolesk, Rostov, Suzdal, Vladimir, Nizhny Novgorod and Yaroslavl. In Moscow, there are two: The famous governmental Kremlin on Red Square, but also the lesser known Izmailovo Kremlin in the northeast part of the city. Contrary to its name, Izmailovo was not built for protection, but as a marketplace and cultural center. Home to the bread museum and the vodka museum, Izmailovo is now a popular hotspot for tourists and locals alike. The market brims with souvenirs and traditional handcrafts. The stands are a festival of color, with Ushanka hats and Matryoshka Dolls lining the stalls. Barbeque smoke wafts between the stands, as sticks of meat and fish sit grilling on open air barbeques.

Zander Walker, my "live like a local" football fan, heads past the rows of Russian fish and straight to the kebabs. Six-hundred rubles later, breakfast is served, with a Russian beer to wash it down.

When pondering on beautiful buildings in Moscow, the structure of St Basil's Cathedral, with it's confusing culmination of colors and spires, is normally the first to come to mind. The Izmailovo Kremlin, arguably, is even more impressive, with its Alice in Wonderland turrets and tiered domes glinting with their skins of colored tiles. The cultural-complex of Izmailovo is modelled after the fairy-tale depictions of Old Russia. Stepping into the wooden maze is like stepping back in time, or into some kind of surreal hyper-reality. "It's like being in Disneyland," says one tourist from Brazil, who did not expect to find herself in such a place when she followed her smartphone map to her hotel.

It really is like being in a fairy-tale, one made ever more bizarre by Zander Walker, who struts along the bridge atop the city, flag blowing about his person. Like a real local (ahem), he pauses to spend far too much on an Ushanka-hat. It's an item of clothing that Russian folk don't tend to wear in the city, much less in the summer time. 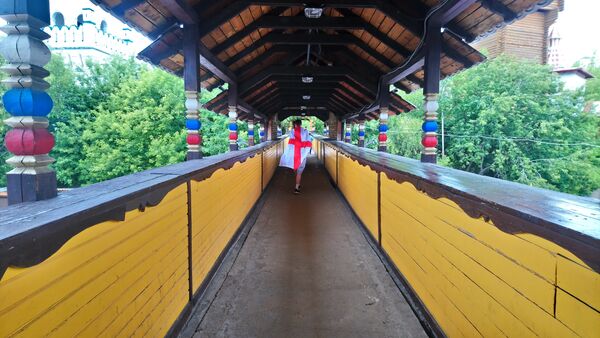 In the fashion of a good, well-meaning novice, Walker exits fairyland and traipses to Moscow's main Kremlin, on Red Square. We don't get any further than this, as a swarm of football fans (who aren't even trying to live like locals), queue up to take a photo with Zander and his flag. We're coming up to the fourteenth photo, with no end in sight and I no longer feel like a journalist, but an exploited photographer, so I call it a day.

Walker tips his Ushanka at me and walks off into the crowd to find some vodka, his tribute to St George billowing around him.