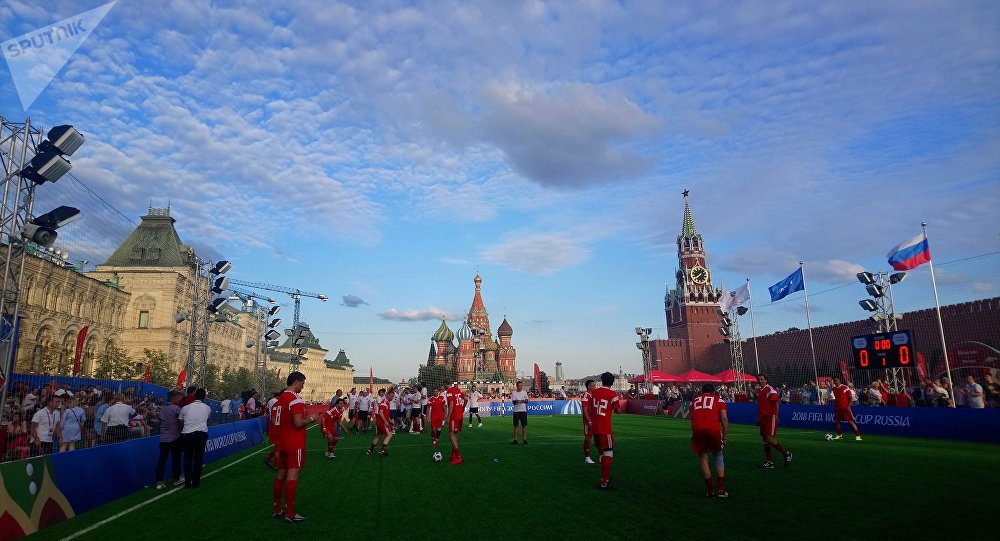 As the sun goes down on Red Square, twenty-three British fans jog up and down a miniature football pitch; they practice high knees, backwards jogs and heel kicks. They’re warming up for one of the more intense games of the tournament: England fans vs Russian fans.

In the near distance, St. Basil's Cathedral is submerged in the dying sunlight; the clock in Spasskaya Tower chimes eight o'clock. The pitch is far too small for the forty-six hopeful fans warming up on the artificial grass, but it's their turn to shine. A small crowd gathers in the stands, chanting in support of their respective teams. The media swarm in to snap a picture of the players in their shirts: it's a rare opportunity to catch the white English strip alongside the white Russian strip. It's rarer still to get a shot of the famous, candy-cane like cathedral in the background.

A little warm up for the fans match between #Eng and #Rus @ the Red Square, Moscow pic.twitter.com/GHFOtQmSob

Those kitted up and ready to play may not be professional footballers on the English side, but the game is a serious one. The organiser, Richard Peers, runs the British School of Football in Moscow. He explains how this game symbolises ‘friendship through sport'; with sport being the ‘best means to engage'. Given the undeniably tempestuous UK/ Russia relations of late, this World Cup has been an opportunity to smooth out some of the diplomatic rifts between the nations. An example of sport spearheading through the swamp of politics.

"I have talked to staff from the embassy, from businesses, tourists. Only once in three weeks have politics been mentioned."

It is an interesting juxtaposition. In the run-up to the Cup, the opposite was true, politics was all anybody talked about. As Mr. Peers notes, "after all that has happened over the last few months, UK/ Russia relations are very different." This is an opportunity to put the countries' positives into the media spotlight, and to promote the true reality of Russia. A month ago, when people discussed England versus Russia, they were not picturing a friendly played out in the heart of the Russian capital. Most likely, they would hark back to the European Championships of 2016.

Al Humphries 'Big Al', 54, from Northampton, is in the stands watching the game. He notes his anxiety in planning his trip to Russia — talking specifically on the subject of the European championship two years ago in Marseilles.

"I was frightened at first. I thought I wasn't going to come. I thought it was going to be a bloodbath. Especially for England fans, we're a target, and we've got a reputation."

But with such beliefs, why did ‘Big Al' decide to come to Russia for the World Cup championships?

"I thought things would have changed, and of course, it was right. It's not the same anymore. I thought it was going to be very nasty here, but it's just been unbelievable. I mean just look at this! A friendly!"

Big Al gestures to the people on the pitch. Both teams are well into the game, sweat flying.

Big Al's mate, Matt from Warsaw, weighs in. He said he had not been afraid of coming to Russia for the World Cup, but this raises some eyebrows among his peers. There were not many British fans that were not slightly concerned in the run-up to the tournament. As a result, the reality of Russia has come as a surprise to many.

"Getting the Fan Ids and visas, easy. Tickets, ok, I had to go collect them myself. But, the streets are clean, the police are polite, and the underground is amazing. I think this is really good for Russia. Everyone has been so welcoming, and you know, the Western world has a view of Russia that could be changed through this World Cup."

Mr. Peers agrees, and his belief in football as a tool to bring people together is apparent. As a British man living in Moscow, he has well and truly experienced both sides of the coin.

"Russia is away from the grassroots, the people are good, hospitable, genuine. Of course, there are bad people in every country, but overall, this is a good country."

By the end of the game, England has been thrashed by Russia. But it is a thrashing in the friendly sense of the word. Later, the two teams head off to the pub, to share dinner and beers. This game, at least, is a concentrated version of the World Cup overall. No matter what muddies the diplomatic reputation of a nation, the people within it are always capable of being friendly. 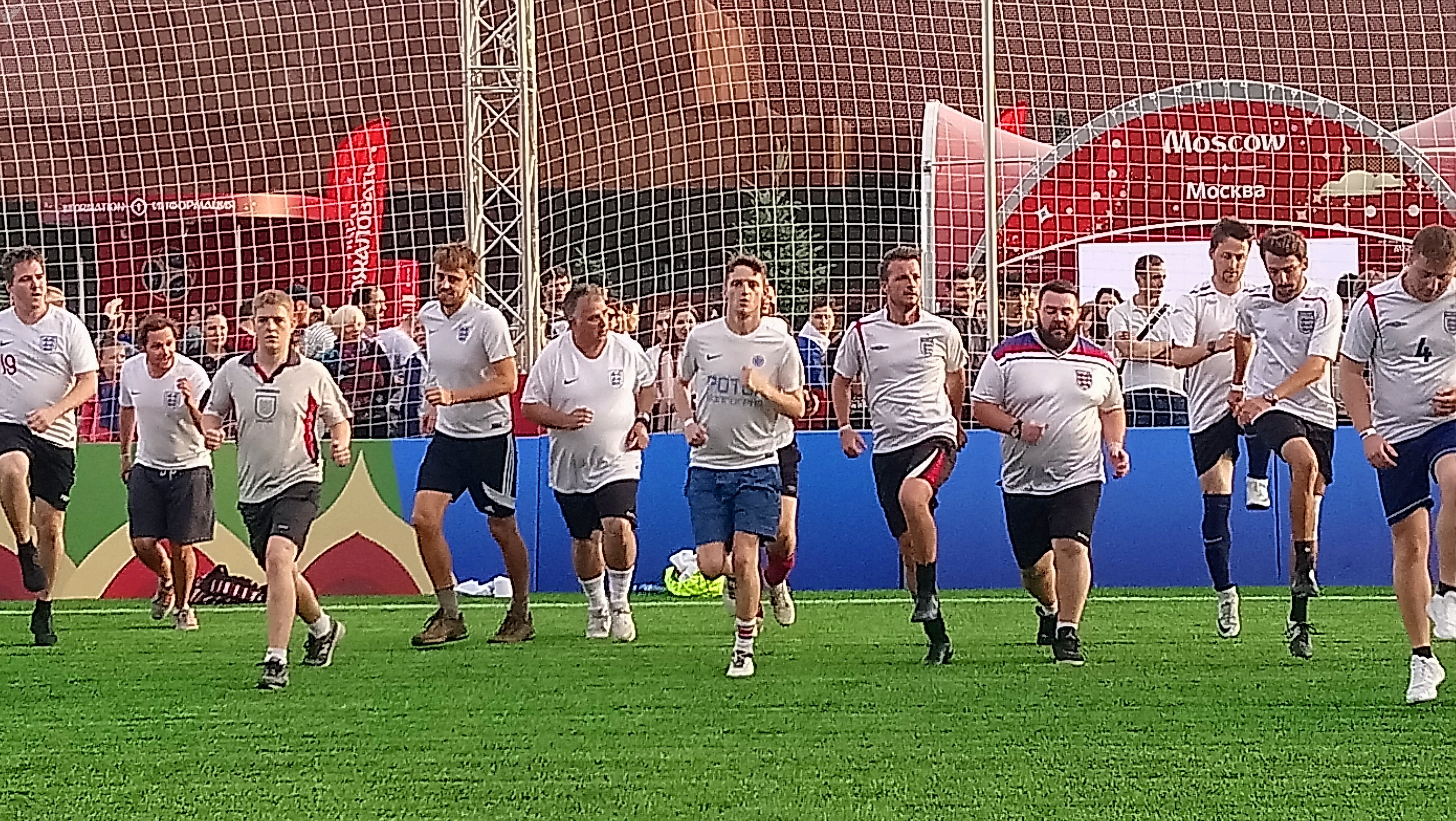