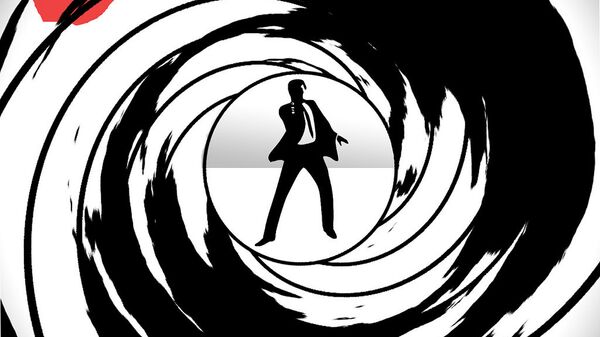 CC BY 2.0 / Themeplus / James Bond 007 10
Subscribe
International
India
Africa
Briton Mark Acklom, who posed as an MI6 agent in order to con a woman out of US$1.121 million, has been arrested in Switzerland after a worldwide manhunt that lasted two years. He’s far from the first fraudster to pose as a spy.

Acklom's story is a surprisingly common one — many individuals the world over have pretended to work with or for intelligence agencies in order to exploit the vulnerable and innocent, in search of money, sex, fame, status and more. Typically, their victims are everyday men and women — although in some exceptional cases, governments and the media have been hoodwinked.

As 2006 was approaching its end, 21-year-old Leanne McCarthy walked into an off license in Oxford, UK — behind the counter stood 25-year-old Wayne Gouveia. The pair hit it off and then some, and he was soon showering her with expensive gifts and treating her to luxury holidays.

McCarthy was bedazzled by his generosity — but also curious as to how the young shop employee could afford it all. When confronted about the source of his apparent riches, Gouveia would drop a bombshell — he was actually working undercover for domestic British spying agency MI5. He also revealed their meeting had been no accident — he was in fact on a mission to bust an international criminal syndicate being run out of the jewellery shop in which she worked. To make matters worse, he'd discovered her boss believed she knew too much, and intended to kill her. 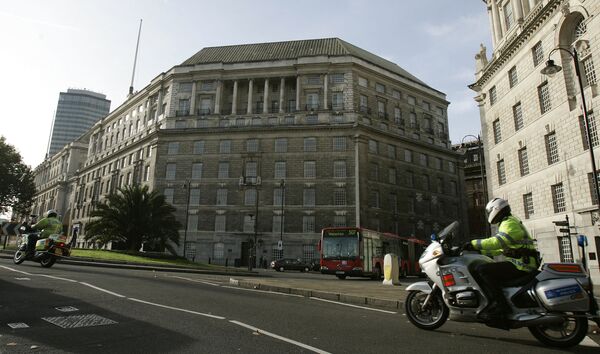 A general view of the headquarters of Britain's internal security service MI5 , in London Friday Nov. 10, 2006
© AP Photo / Alastair Grant
Her employer's intended means of execution was, allegedly, anthrax — as a result, he forbade her from opening her own post as a result, lest any envelopes she received contain lethal spores. From then on, espionage became a fundamental facet of their relationship — Gouveia compelled McCarthy to sign a copy of the Official Secrets Act, and frequently took her taking her on covert operations, spying on houses and cars in the city at night.

After around 11 months, the pair began living together — although their relationship wouldn't last much longer. Gouveia had become increasingly controlling, paranoid and erratic — "it just got to a point where he was being really nasty to me," McCarthy later said.

Soon after exiting Gouveia's clandestine world, his former partner began to have doubts about his story — opening her post again for the first time in over a year confirmed her suspicions. In reality, Gouveia had taken out numerous loans and credit cards in her name to fund their relationship, with bills running to almost £14,000.

He was subsequently convicted for his fraud — during his trial, it was revealed he was obsessed with the 2002 film Catch Me If You Can, which tells the true story of Frank Abagnale Jr, a super-successful con artist who impersonated an airline pilot, FBI agent, doctor, lawyer and professor during the 1960s.

While his activities meant McCarthy was blacklisted for credit by major lenders and struggled for years to secure a mobile phone contract, Gouveia's lack of assets resulted in the judge fining him a mere £10.

Gouveia's deceptions seem positively tame when compared to those of Robert Hendy-Freegard, a barman and used car salesman who fooled several people into going underground for fear of IRA assassination while pretending to be an undercover intelligence officer. 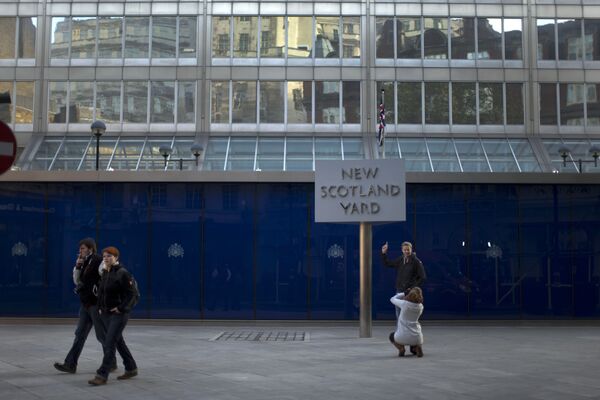 A tourist poses for a photograph by the rotating sign outside New Scotland Yard, the headquarters building of London's Metropolitan Police force in central London
© AP Photo / Matt Dunham
After meeting victims — typically at social occasions or in the pub or car dealership where he was working — he would reveal his "role" as an undercover agent for MI5, Special Branch or Scotland Yard, working against the IRA. He would win them over, ask for money and make them do his bidding — while simultaneously cutting them off from all contact with family and friends, making them undergo "loyalty tests" and forcing them to alone in poor conditions.

In 1992, while working in a pub in Newport, Shropshire, he made his first con, befriending two women and a man, telling them he was an MI5 undercover agent investigating an IRA cell in their college. He forced the man to let himself be beaten up to prove his loyalty, and show he was "hard enough". He also convinced him to behave in a bizarre manner in college to prove his loyalty, and alienate him from friends. Then, Hendy-Freegard told him his cover was blown and both of them had to go undercover — he told the women the man had cancer and convinced them to come on a 'farewell tour' with him all over England.

While travelling, he told them to sever all contact with their families because their lives were in danger. They then moved to Sheffield with Hendy-Freegard, and gave him all their money — one handed over £300,000. After arrival, the quartet spent five straight months inside their flat in the city, because Hendy-Freegard had forbidden them to go out.

The group were eventually allowed to leave, and take jobs — although they continued to hand most of their cash to Hendy-Freegard. One of the women became his lover, later giving birth to his two daughters. He then seduced a newly-married personal assistant taking care of his children — he similarly told her he worked for MI5, forced her to cut contact with friends and family, and made her undertake loyalty tests, including sleeping in Heathrow airport and park benches for several nights, and pretending to be a Jehovah's Witness so his bosses in MI5 would let them marry. She was told she was under constant surveillance and a sniper was watching their home.

When the mother of his children found out about this and other affairs and confronted him, he beat her up and threatened to kill her, before telling her she could not talk to anyone for "security reasons".

Authorities aren't sure how many other people fell victim to his deceptions, but it's certain he conned a further five at least, most notably an American child psychologist in 2002 — he told her he'd infiltrated a criminal network and had killed a target who had threatened to expose him. He said he wanted to marry her, on condition she also became an agent and cut off the contact with her family. Again, he instigated loyalty tests, and made her change her identity. He also urged her to kill her son.

He told her they would move to a lighthouse — when she refused, he demanded £80,000, claiming the British state had to be repaid because arrangements had already been made, which she paid. At one point in their relationship, she spent three weeks ‘hiding' in a bathroom, locked in by Hendy-Freegard.

However, his victim would help Scotland Yard and the US Federal Bureau of Investigation catch him in 2002 in a sting operation at Heathrow airport. At trial, he denied all charges and claimed they were part of a conspiracy against him. He was convicted of two counts of kidnapping, 10 counts of theft and eight of deception in June 2005, and sentenced to life in prison.

The War on Terror helped several individuals of questionable integrity launch successful careers as ‘terrorism experts'. Among them was Jonathan Keith Idema, a US Special Forces veteran who convinced scores of Western journalists he was a anti-terror superhero using his expert ‘black ops' training to track down and capture insurgents in Afghanistan. 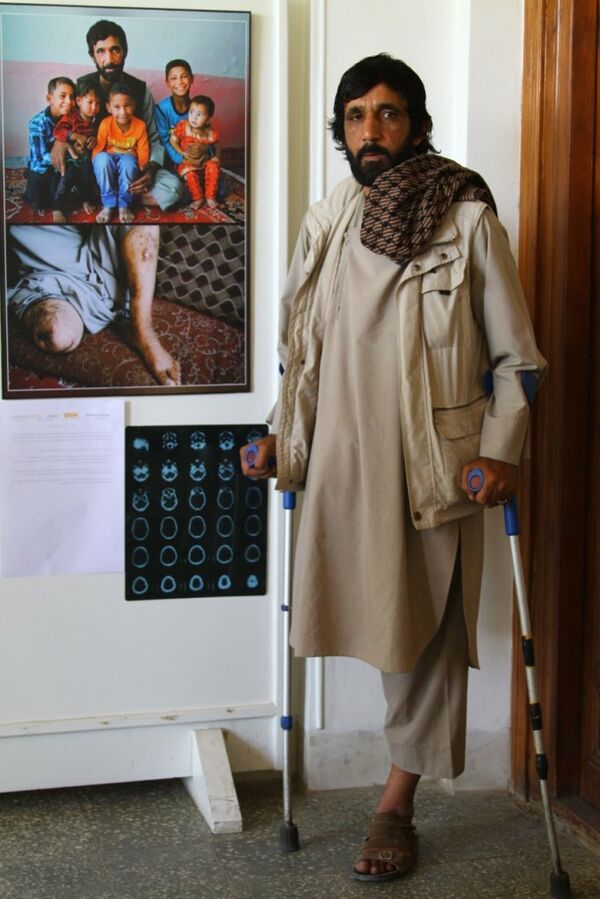 Afghanistan: the scars of war
© Sputnik

He illegally entered the country in November 2001 with two other Americans — former soldier Brent Bennett and television journalist Edward Caraballo — to conduct "humanitarian relief" work. He quickly went about claiming to all who would listen that he was working for the US government, and aid agencies he worked with became extremely wary of his intentions.

In December 2001, Edward Artis, director of one of the aid groups, wrote to US Army Special Operations Command warning them of Idema's activities, saying he was a "very dangerous person by virtue of his carelessness and stupidity."

"Before he gets someone killed he needs to be removed from the area. I feel given the amount of "time that he has been allowed to run around telling people he has been working for the U.S. Embassy, Pentagon, Special Ops undercover or the CIA, he has garnered or bought enough contacts to pose a real threat to not only me and those near me but the over all mission of the United States and the Coalition fighting there," the letter stated.

He went on to form a group he called 'Task Force Saber 7' consisting of two other Americans and several Afghans, and frequently interacted with journalists covering the war, going to great lengths in interviews to stress connections with the CIA and Special Forces. He also provided journalists — for a fee — with terrorism training videos he claimed to have found in Afghanistan, which were duly played on major international news networks. The videos were almost certainly fake.

Along the way, Idema also garnered a reputation for having a volatile temper — on several occasions, he threatened journalists with bodily harm or death, such as in December 2001 when he said he was going to kill a reporter from Stars and Stripes for disclosing his conviction for fraud. 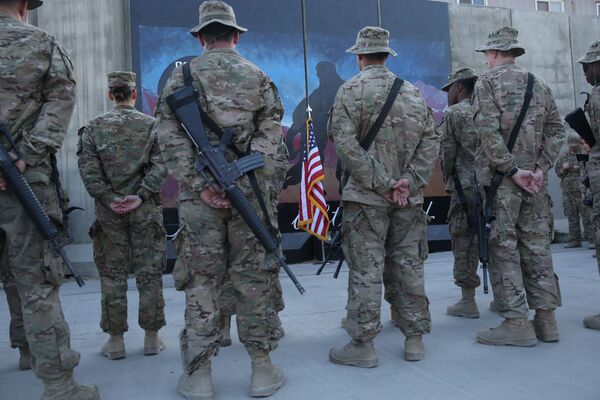 U.S. service members stand in front of a U.S. flag during a ceremony on the thirteenth anniversary of the 9/11 terrorist attacks in front of the World Trade Center Memorial at Bagram Airfield, Afghanistan, Thursday, Sept. 11, 2014
© AP Photo / Massoud Hossaini

In 2004, coalition forces received a detainee from Idema, who he said was associated with the Taliban. Once in custody, the detainee was determined not to be who Idema claimed, and was released within hours. Idema also had contact with the Canadian-led NATO mission, convincing them to loan him  explosives experts and bomb sniffing dogs.

After three years of violent vigilantism and fawning media coverage, Idema, Bennett and Caraballo were arrested July 5 2004 by Afghan police after a raid in which they found eight Afghan men — some hanging from their feet — bound and hooded in detention.

The trio were charged with entering the country illegally, running a private prison, and torture — and in September that year, Idema and Bennett received ten-year prison terms, while Caraballo received eight years. Idema and Bennett's sentences were later cut to five and three respectively. Four Afghans working with Idema were sentenced to between one and five years imprisonment.

Caraballo was later pardoned by President Hamid Karzai and returned to the US, while Bennett was freed early for good behavior September 30 2006. In April 2007, Idema himself was set free by the Afghan government — but he refused to leave, demanding his passport, personal effects, and documents he claimed proved his official connection with the US government be returned to him. He also requested compensation for US$500,000 worth of equipment, mostly computers, weapons and cameras, confiscated by authorities. He eventually left Afghanistan after being given a new passport and resettlement grant.

He died in Mexico of AIDS in 2012 — claiming to the very last that he was in fact working for the US government. Supporters of Idema claim this legitimate connection was demonstrated when he was arrested in Tashkent, Uzbekistan for visa problems. He and two associates were freed after Uzbek authorities received a letter from the local US embassy, written by an officer in the US Defense Attache's Office, describing Idema as a "contracting officer from the Defense Department who arrived to the Republic of Uzbekistan for an official trip." The letter was verified as authentic by the director of the Department of State's press office.

Moreover, US officials have admitted Idema frequently contacted the Defense Department through the front office of General William G. Boykin in the Pentagon. However, all of those contacts were outside US Military operating channels, and were all one-sided calls from Afghanistan via his personal Satellite Phone. Boykin's office also repeatedly asked Idema to stop making unsolicited phone calls, because they were disruptive and time-consuming.