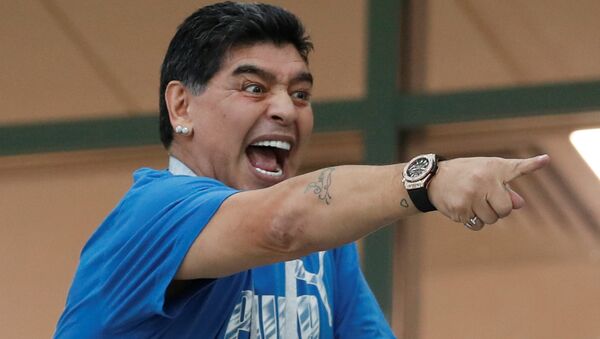 Spanish footballer Sergio Ramos has tweeted that he is preparing for his team's encounter on Sunday with their Russian rivals at the 2018 FIFA World Cup.

In an interview with the Spanish sports newspaper Marca, football legend Diego Maradona reiterated that he does not perceive defender Sergio Ramos as a top-notch player of Spain's national team.

"If Sergio Ramos wants, I apologize, but I will not change my purely football thinking. He is a great player, he is a great captain, he can become a good leader, as we see in Real Madrid, but for me it's not a crack," Maradona said.

Earlier, Ramos claimed that "Maradona is light years away from the best Argentine player in history which, for me, is Lionel Messi."

Ramos's remarks came shortly after the beginning of the 2018 FIFA World Cup in Russia, Maradona responded to speculation by those who described Ramos as a star.

"They told me: 'Ramos is a star,'. No, Godin is a star that defends you, that rules, that creates a goal for you, who is a champion, that does not miss a game," Maradona reportedly noted.

Later on Sunday, Spain and Russia face each other at a World Cup game in Moscow, in a bid to advance to the tournament's quarterfinals.  On June 30, Ramos wrote in his Twitter page that he is already waiting for the June 1 match.