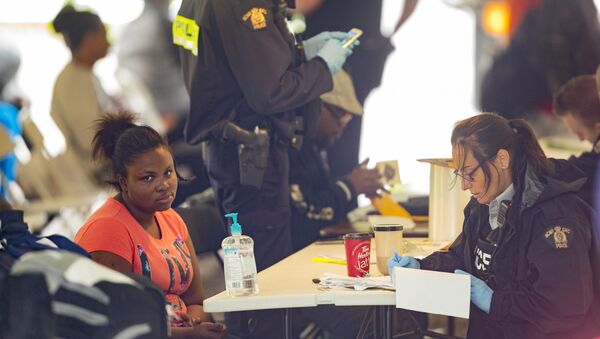 © AFP 2021 / Geoff Robins
Subscribe
While the database was created long ago, it was repurposed into a terrorist no-go list after the 9/11 attacks. According to a report, Canada and the US agreed to further expand the list in 2016, but have still not negotiated the details.

The Canadian border guards are using a US-made database of people with alleged ties to terrorists entitled "Tuscan" in their identity checks for all incoming and departing persons, The Guardian reported, citing government documents obtained by it.

According to the media outlet, Tuscan contains information on some 680,000 people who may be subject to extensive background checks or even denied entry to the country. The database is also reportedly used in identity checks of those applying for visas or immigration.

The media outlet also pointed out that the list, which is rarely referred to in government documents, was created in 1997, but received new life after 9/11, when it was significantly expanded. Canadian Prime Minister Justin Trudeau and then-US President Barack Obama reportedly agreed in 2016 to expand it even further, but the details of the cooperation between two countries are yet to be revealed.

Relations between Washington and Ottawa have been strained since US President Donald Trump announced the imposition of harsh import tariffs on steel and aluminum coming from various countries, including Canada. Canadian Prime Minister Justin Trudeau vowed that Ottawa would give a reciprocal response to the tariffs.