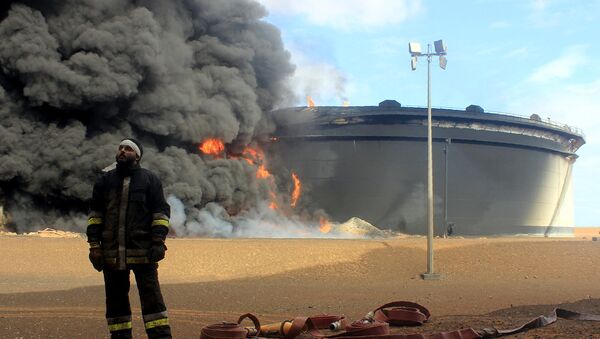 MOSCOW (Sputnik) - Libya's National Oil Corporation (NOC) said in a statement that further activities of militants near the oil terminals in the towns of As Sidr and Ras Lanuf could result in an environmental disaster.

On Thursday, militants affiliated with al-Qaeda terrorist group* attacked the oil terminals. Troops from the Libyan National Army (LNA) repelled the attack, however the militants continued their activities in the area.

"National Oil Corporation (NOC) confirms that storage tank No. 12 of the Harouge Oil Company in Ras Lanuf has been significantly damaged as a result of the armed incursion of the Ras Lanuf and Es Sider port terminals. NOC calls for the unconditional and immediate withdrawal of the militia operating under Ibrahim Jadhran to prevent an environmental disaster and further destruction of key infrastructure," the statement said on Saturday.

US Forces Conduct Airstrike in Libya, Manage to Kill One Terrorist
According to the NOC, further violence could result in more damages and consequently have negative impact on the economy.

"NOC also calls on all parties not to use the oil sector, NOC and associated petroleum facilities in a political game and to remove them from all possible conflict. Any act that endangers life and sheds Libyan blood should be condemned by all. These facilities belong to the Libyan people and are crucial to the future prosperity of the country," the corporation added.

Libya has been torn apart by conflict since its long-time leader Muammar Gaddafi was overthrown in 2011. The eastern part of the country is governed by the parliament, backed by the LNA and located in Tobruk. The UN-backed Government of National Accord (GNA), headed by Prime Minister Fayez Sarraj, operates in the country's west and is headquartered in Tripoli.

In 2016, the LNA units drove the militants from the oil terminals controlled by radicals and later handed control over the facilities to the NOC.