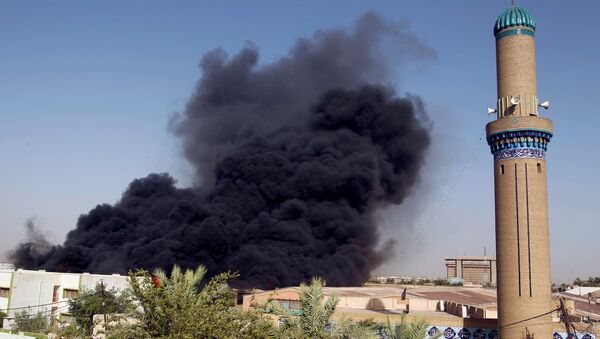 Following Iraq’s May 12 parliamentary elections, which were a win for Shiite leader Muqtada al-Sadr's Alliance Toward Reforms Party, Iraq’s Parliament called for a recount. But before it could be done, a number of ballots were destroyed on June 10 when a fire broke out at a warehouse holding ballots in Baghdad.

Massoud Shadjareh, founder of the Islamic Human Rights Commission, told Radio Sputnik's Loud & Clear that given the state of chaos still gripping Iraq, it's anyone's guess who the culprit is.

"[T]he current prime minister [did] extremely badly. I think the… perception is that he is one of those that would benefit from this if there is corruption, and if there is any irregularity," Shadjareh told Loud & Clear hosts John Kiriakou and Sputnik's Walter Smolarek. "But I think there is another aspect that we need to take into account: there are other elements that want to create conflict, or fuel the conflict, and [create] civil war, possibly, and even go [and wage] armed conflict and this could have been, sort-of one of those dangerous incidents which could trigger that sort of conflict."

The Iraqi Independent High Elections Commission was renting the warehouse from the Iraqi Trade Ministry at the time. One of their officials, along with three police officers, have already been charged for arson."

​But Shadjareh says that it's important to look at not just who would benefit from a recount of the ballots, or the lack thereof, but more importantly who benefits from the potential havoc caused by the burning of ballots. "From that point of view there are many who could benefit from inside and there are many who could benefit from outside. I mean, let's face it, Iraq has been sort of shattered from this invasion and, you know, after all these years, it still has not been put back together, and there is really a level of… chaos and also corruption, which wasn't seen in Iraq prior to this… [US] invasion," he said.

"I think everything is possible in Iraq, unfortunately. The good aspect, and the good thing, is that those in the key positions actually want to move forward," he stressed.

In Iraq, the party that wins the most seats in Parliament gets to elect the prime minister and president, who in turn form a government. In the initial counting of votes, that opportunity went to the Alliance Toward Reforms party, or Saairun, a coalition of communists and supporters of al-Sadr, a Shiite cleric and former militia leader who once fought against the US occupation of Iraq.

As the country's democracy begins to take shape again after the deposing and execution of its former leader Saddam Hussein, it is still struggling with attaining autonomy and a huge amount of mistrust and corruption, Shadjareh suggested. "There is a huge, sort of, interest both inside and outside. And all the players, all the regional players and regional powers… have tremendous interest in this, you know: Saudis, Americans, Westerners, Iran, Israelis, everybody has got an interest in this and this is one of the problems that Iraq is facing."

In such a quagmire, the "deliberate arson" is especially disconcerting, but its meaning is uncertain, Shadjareh emphasized. "Was this because they want to hide the rigging of the election, or was this something to trigger further… conflict. It is really anyone's guess," he told Loud & Clear.

Nonetheless, there's still much reason for hope. "I think what we are seeing right now is Muqtada al-Sadr is announcing that we don't want to allow ourselves to go into civil war, and the Fatah movement, which is the militias being associated [with] Iran; they don't want to go into any sort of conflict and they seem to be ready to come together to… lead a government."

It's something that the Iraqi people have been awaiting a long time, as the country has seen incredible losses to infrastructure and civilian life since the 2003 invasion and overthrow of the government. "Ordinary people in Iraq are sick and tired of the corruption, they're sick and tired of the conflict, and they really want to see some sort of move forward and to bring better lives and more security, more stability, better economy and some sort of better future," he said.

"I think those in power, those who have been elected, have tremendous pressure on them to deliver and I hope that that will be the… reason we won't see a further conflict."