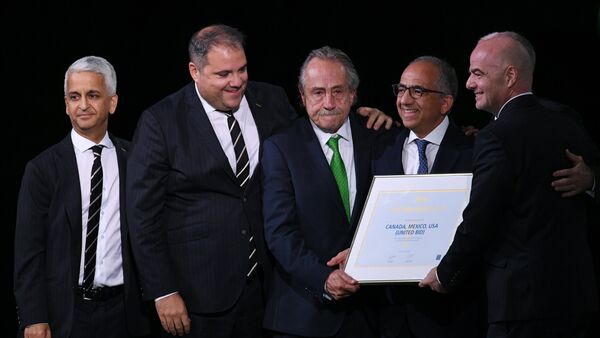 © Sputnik / Alexander Vilf
/
Go to the photo bank
Subscribe
Canada, Mexico and the United States will host the 2026 FIFA World Cup after the 68th FIFA Congress voted to back the joint bid on Wednesday.

Reacting to the announcement later in the day, US President Donald Trump offered his congratulations on Wednesday to the United States, Mexico, and Canada for working together in order to win the bid to host the World Cup in 2026.

The U.S., together with Mexico and Canada, just got the World Cup. Congratulations — a great deal of hard work!

​This will be the first time the three countries host a World Cup as a group, winning over the Morrocan bid: the North American bid received 134 of the 203 votes, while Morocco polled 65 in the ballot at a FIFA Congress held in Moscow on the eve of the 2018 World Cup. Football's biggest event will return to North America for the first time since 1994 when the United States hosted the tournament.

North America's victory is mostly connected with the fact that Morocco's bid existed mainly on paper: many stadiums and roads were due to be built and thus the FIFA inspectors warned that "the amount of new infrastructure required for the Morocco 2026 bid to become reality cannot be overstated."

At the same time, the inspectors classified the North African nation's stadiums, accommodation and transport as "high risk", giving it just 2.7 out of five in an evaluation report.

The last hosting right FIFA has awarded were those to Qatar for the 2022 World Cup.