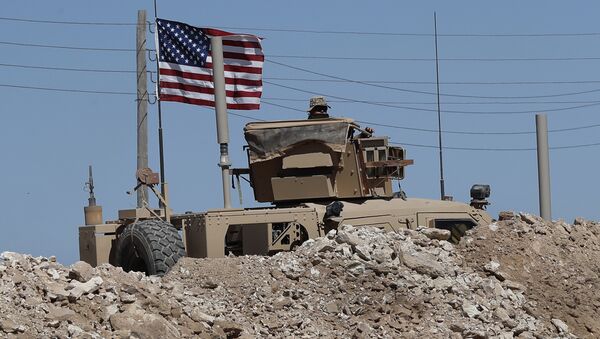 ANKARA (Sputnik) - Ankara and Washington will make a joint decision on the formation of the leadership in Syria's Manbij after the Syrian Kurdish People's Protection Units (YPG) leave the city, Turkish Foreign Minister Mevlut Cavusoglu said on Wednesday.

Relations between Turkey and the United States are in crisis because of US support for the YPG, which Ankara considers a terrorist group linked to the Kurdistan Workers' Party (PKK) banned in Turkey. Washington explains its actions by the need to combat the Daesh* terrorist group.

Earlier, Turkey repeatedly accused the United States of not delivering on its promises to withdraw the YPG from Manbij as the Kurdish formations liberated the city from Daesh in June 2016.

On May 17, Cavusoglu said Ankara expected an agreement with Washington on the roadmap for Manbij on June 4, during his meeting with US Secretary of State Mike Pompeo.

READ MORE: Turkish Op in Syria: US Promises to Retaliate Against Any Attack on Manbij — SDF

"The roadmap for Manbij has specific steps, they are tied to the calendar. A concrete step: YPG will leave. Turkey, along with the US, will decide who will take part in the leadership instead of YPG, and who will participate in the security forces, perhaps on a parity basis," Cavusoglu said, as quoted by the Hurriyet newspaper.

It is necessary to take measures to ensure security after the withdrawal of the YPG from Manbij, so that their place is not occupied by "other terrorists," the minister stressed.

"This is a region where the Arabs account for more than 90 percent of the local population, Kurds only two percent, and it is impossible for them to be represented at more than two percent in the leadership. After successful implementation in Manbij, it will become a model for entire northern Syria, in particular, Raqqa, Kobani, but where the majority of the population is Kurds, it is natural that the leadership is Kurdish," Cavusoglu said.

Turkey, US Agree on Roadmap for Cooperation in Syria's Manbij
He continued saying that Ankara was also discussing with Washington what would happen with the YPG formations after their withdrawal from Manbij.

"Where will they go? To the desert? Who will be able to return to peaceful life after laying down their arms? These details are very important, and we are discussing them with the military, with the intelligence, at the meetings of our delegations," Cavusoglu said.

Later in the day, the head of the city’s military council told Sputnik that Turkey and the United States have not reached an agreement on the settlement of the situation in Manbi.

"To date, the US and Turkey have not reached an agreement," Muhammad Abu Adel said, adding that reports on the alleged deal were "just speculations in the media."

He went on saying that there were no Kurdish forces in the city. He specified that there were only residents who had defended the city, while units of the Syrian Democratic Forces had completely withdrawn from the city.

On January 20, Turkey and the Free Syrian Army (FSA) opposition forces launched Operation Olive Branch in the Syrian northern district of Afrin aimed at "clearing" Turkey's Syrian border of the YPG and the Kurdish Democratic Union Party (PYD). In March, Ankara announced that Afrin was under complete control of Turkish forces. Erdogan, however, said that the operation would not end with Afrin, clarifying that the regions of Manbij and Idlib would be the next targets.