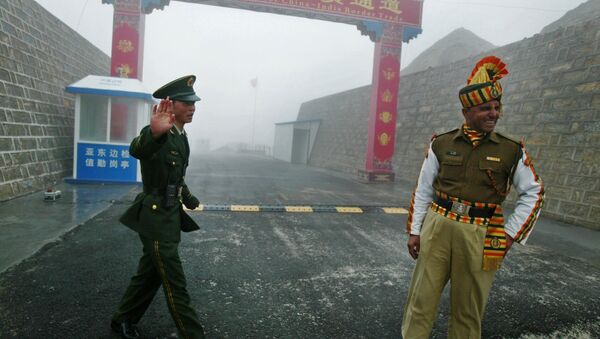 New Delhi (Sputnik): The state-run All India Radio (AIR), as well as private television channels that have been jammed by more powerful Chinese transmitters, will now be able to reach Indian citizens residing along the border with China with the laying of an optical fiber cable network.

"We will soon start work on the extension of the optical fiber cable in the border areas. The Union cabinet had discussed the issue and sanctioned the additional fund only ten days before. Soon all the border areas along the Indo-China border will be connected with OFC which will greatly improve mobile and telephone connectivity besides improvements in radio frequency," Nirmala Sitharaman, India's minister of defense, said Tuesday.

Quad Partners Will Not Defend India Against China - Indian Navy Chief
Earlier this month, the Narendra Modi government had approved a $1.7 billion network for spectrum (NFS) project to lay an alternate communication network for defense services. The project will be completed in the next 24 months.

Last month, Indian news agency PTI had reported that people in Arunachal Pradesh were greeted with a message from a Chinese mobile network every time they turned their phones on.

"The government allows only a limited number of towers of a certain frequency in the border areas. As a result, people here receive signals from Chinese telecom companies. They cannot access the network though for lack of a SIM card. The signals are strong enough to stretch up to 10 km on the Indian side," the PTI quoted unnamed army personnel.

READ MORE: China's Stance on Arunachal Pradesh Has Had No Impact on India — Analyst

For more than a decade, several formal requests were made by residents of the border areas to the Indian government to boost their frequency network, as they did not have access to Indian television channels or radio networks.