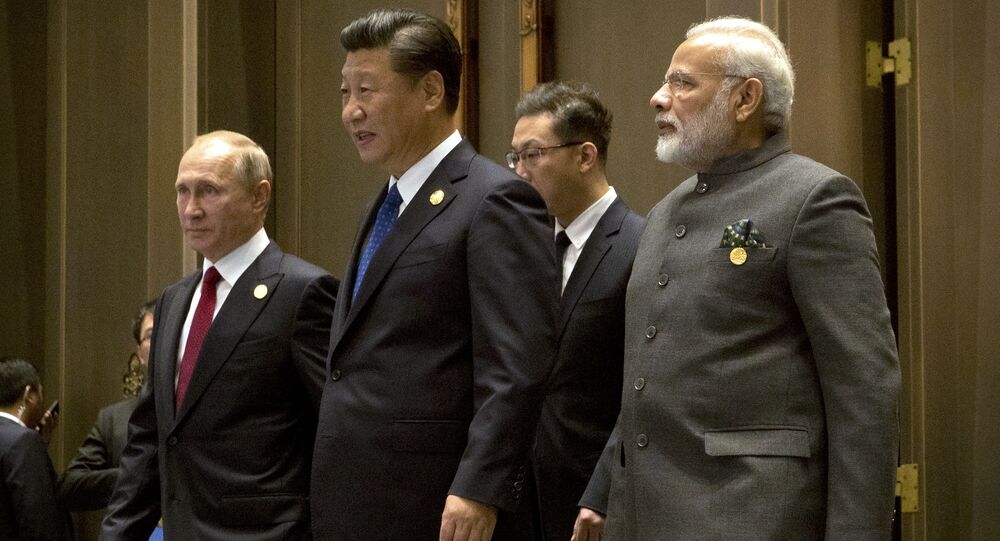 Analysts view the upcoming visit of Indian Prime Minister Narendra Modi to Russia soon after concluding an informal meet with the Chinese President, as an indication of world powers teaming up against the US following President Trump’s gradual undoing of global commitments made by his predecessor.

New Delhi (Sputnik) – India's external affairs ministry has said that the visit by Prime Minister Narendra Modi to the Russian city of Sochi on May 21 to hold an informal summit meeting with President Vladimir Putin would be an important occasion for the two leaders to exchange views on international matters in a broad and long-term perspective with the objective of further strengthening the "special and privileged" strategic partnership. Modi's Russia visit comes within a month of his visit to the Chinese city of Wuhan for an informal summit with President Xi Jingpin.

Preparations are on for Prime Minister Narendra Modi's visit to Sochi for talks with President Putin on May 21. The India-Russia agenda is vast and of practical relevance to both countries. A vital partnership in today's world. @MEAIndia @mfa_russia @IndEmbMoscow @IndianDiplomacy

"The summit meeting of Indian Prime Minister in China and now with Russia should also be looked at from the point of view that world powers are breaking off from American leadership due to the undoing of the Obama-era global commitments by the US. The stand of the three major European powers France, Britain, and Germany in the issue of Iran deal in just one of the many examples, "Dr. Sawarn Singh, professor of International Relations at Jawaharlal Nehru University, New Delhi opined.

READ MORE: India, Russia and China Could Fight for Free Trade Against US Protectionism

"Russia and China have come closer and this closeness has also been drifting towards Pakistan and this situation diminishes India's position as a leader in South Asia. The proposed summit meet between leaders of India and Russia can do a lot in terms of making upon India's long-standing relationship with Russia. The trust can further help India to enhance its position in South Asia," Dr. Swarn Singh said.

The views and opinions expressed by Dr. Sawarn Singh in this article are those of the speaker and do not necessarily reflect the position of Sputnik.

The Age of Economic Alliances Between Russia, China and India