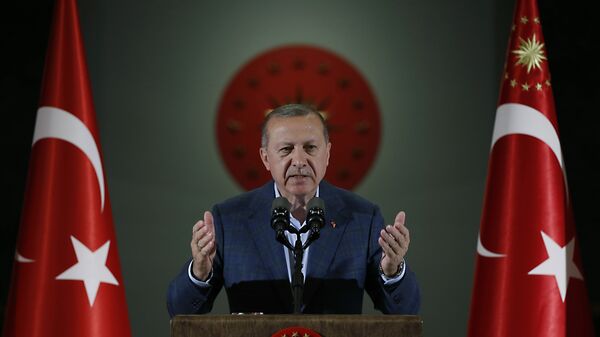 © AP Photo / Presidential Press Service/Pool
Subscribe
International
India
Africa
Earlier, the French president slammed the activities of the Erdogan's supporters, who had been tearing down advertisements for the Le Point magazine, which had published a controversial article about the Turkish president.

Turkish Foreign Minister Mevlut Cavusoglu angrily slammed Emmanuel Macron's comment on the actions of supporters of the AKP [Erdogan's Justice and Development Party]. According to Cavusoglu, democracy is not only about "insults, curses and lies by one side," but also about taking into account the "sensitivities of the other."

"What goes beyond that is hypocrisy. And it's in response to that that the Turkish community in France has expressed its civilian and democratic reaction," he added.

Earlier the French president had branded the actions of the AKP supporters as "unacceptable," as they were tearing down Le Point magazine advertisements in protest at the article about Turkish President Recep Tayyip Erdogan. In the article, entitled "The Dictator. How far will Erdogan go?" the magazine asked the rhetorical question whether the Turkish president is "a new Hitler."

"You cannot put a price on freedom of the press, without it, it's dictatorship," Macron wrote in his Twitter.

The article by the popular French magazine comes ahead of upcoming Presidential elections in Turkey that are to take place on June 24.

This is not the first time that European media draw parallels between Erdogan and Hitler: in April 2017, the German newspaper Die Welt published an article comparing the high level of support for the Turkish president's constitutional referendum on enhancing his powers with the support of Sudeten Germans for the Nazi leader in the 1930s.