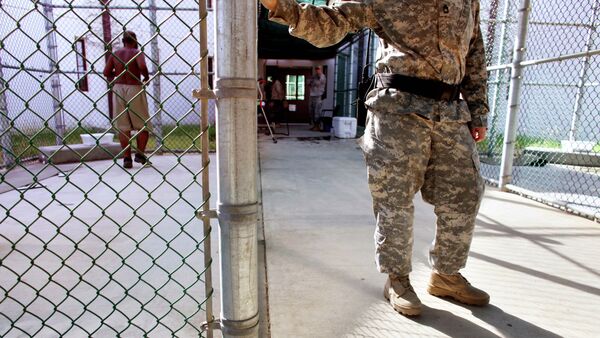 © AFP 2023 / POOL//Brennan Linsley
Subscribe
International
India
Africa
WASHINGTON (Sputnik) - The US decision to boost the population of inmates at the Guantanamo Bay prison facility is part and parcel of a strategy to sow fear worldwide and develop a deterrence system to maintain American global hegemony, analysts told Sputnik.

The head of US Southern Command (SOUTHCOM), Admiral Kurt Tidd, told reporters earlier this week that Guantanamo can handle a couple dozen more inmates without the need for additional resources. The comment came after the Pentagon released instructions on how to fill the prison to capacity.

The Gunatanamo Bay detention facility opened in Cuba in 2002. The administration of former President Barack Obama attempted to close down the center over issues linked to the detention conditions and legality of detentions, but it continued its work, serving as a military prison.

UN Warnings Over Human Rights Violations at Gitmo Remain Disregarded - Analysts
Last week Defense Secretary James Mattis submitted to President Donald Trump guidelines for picking candidates to send to the notorious detention center on the island of Cuba. The move aligns with Trump’s campaign promise to "load up" Gitmo with "bad dudes" as he has termed them.

Peace activist Jan Weinberg told Sputnik the determination of Trump — like his two predecessors presidents George W. Bush and Barack Obama — to illegally keep Guantanamo open was based on the belief that fear and incarceration without trial were essential to maintain the US global empire.

"The very idea that ‘enemy combatants’ will be held away from public purview, without due process of law, for indeterminate lengths of time, subject to torture surely is designed to maintain fear," Weinberg said. "It appears that American foreign policy is modeled on past empires who in order to maintain control resorted to the tried and true Projection of Power methodology of threat of war, violence and fear mongering."

Trump's Guantanamo Order Likely Avoids US 'Imperial Retreat' - Analysts
Far from helping to defend against and deterring terrorism, the continued operation of Guantanamo was an expression of it, Weinberg said.

"Fear is a form of terrorism, is it not?" he asked.

However, a backlash was building up among the American people against the increasingly discredited pattern of lies and misinformation they had been told for so long to justify US global hegemony and Guantanamo’s role in maintaining it, Weinberg observed.

"The political class in Washington DC does not understand that once their warmongering for profit turns into actual wars… the American public will revolt," he said. "The real question is will anyone be around to write ‘The Rise and Fall of the American Empire?’"

University of Illinois Professor of international Law Professor Francis Boyle told Sputnik the Guantanamo Bay facility remained a gross violation of human rights and international law as long as it was allowed to continue operating.

"Gitmo [Guantanamo] is a crypto-Nazi concentration camp… where prisoners are being held and tortured in violation of their basic rights under the Geneva Conventions and the International Covenant on Civil and Political Rights," he said.

Prisoners Once Cleared to Leave Gitmo Now Face ‘Potential Lifetime of Detention’
Boyle said the United States was a contracting party to those international agreements and that violations of the Geneva Conventions were war crimes.

"In the case of Gitmo where these war crimes are both widespread and systematic, it constitutes a Crime Against Humanity that in terms of severity verges upon the international crime of genocide perpetrated against its primarily Muslims of Color Prisoners," he said. "The Gitmo Kangaroo Courts are a joke and a fraud and part and parcel of the same violations of international criminal law mentioned above."

The level of violence authorized at Guantanamo was likely to escalate and eventually lead to authorizing the killing of suspects being held there, Boyle cautioned.

"In the event the Gitmo Kangaroo Courts sentences someone to death and that person is executed, Gitmo will become America’s first Nazi death camp," he warned.