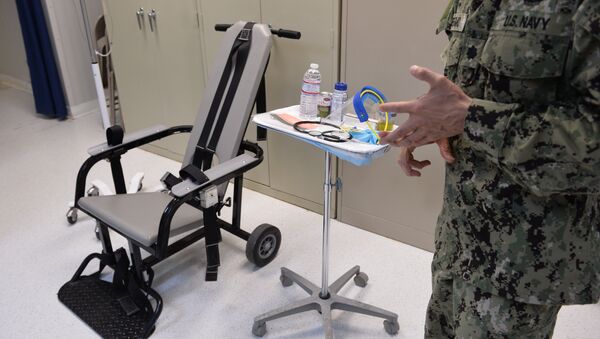 © AFP 2023 / Mladen Antonov
Subscribe
International
India
Africa
WASHINGTON (Sputnik) - Calls by a UN human rights body for the US Government to release terror suspect Ammar al-Baluchi after holding him for many years at CIA detention centers and then at Guantanamo Bay are welcome but will not be heeded, analysts told Sputnik.

"The Working Group considers that … the appropriate remedy would be to release Mr. al-Baluchi immediately and accord him an enforceable right to compensation and other reparations, such as appropriate physical and psychological rehabilitation," the assessment said.

However, the US Government, based on its long track record, is likely to ignore the UN group’s recommendation, Jeremy Varon of the Witness Against Torture human rights group said on Wednesday.

"The United States has long disregarded anything and everything the United Nations has had to say with respect to Guantanamo and torture," he said.

'Terrible' Decision: Trump's Guantanamo Order Contradicts US Values - Lawyer
The United Nations had no realistic leverage to influence the US government in the Baluchi case or similar matters, Varon cautioned.

"Any official statement from reputable human rights organizations condemning US policy is always welcome; but the United Nations has zero ability to influence or constrain US conduct on the issue," Varon said.

The US policy of ignoring the United Nations and other international human rights bodies on such issues had been constant under both Republican and Democratic presidents so far in the 21st century and looks unlikely to change now, Varon observed.

When UN officials tried to visit the Guantanamo Bay detention facility during the presidency of President George W. Bush in the 2005-2006 period, they were not allowed access, Varon recalled.

"As long ago as 2005/6 the UN tried to visit Guantanamo and interview detainees; they were denied access, and the United Nations issued a blistering report concluding that conditions at Guantanamo were ‘tantamount to torture,’" he said.

‘Abysmal’ Treatment: UN Notes US Still Torturing Uncharged Guantanamo Prisoners
For years, the UN Rapporteur on Torture, Juan Mendez, was deeply critical of US policy and in 2017, the United Nations again accused the United States of torture, Varon noted.

However, it is important that international human rights bodies continue to consistently expose and condemn US human rights abuses at Guantanamo Bay and elsewhere, Peace and Social Justice activist Malachy Kilbride, who has worked on the issue said.

"It is important for all governmental bodies to speak out against the United States and the continued indefinite detention of prisoners in Guantanamo," he said.

"When the United States continues to violate international law and norms of treatment of those detained then I hope the international community will not only speak out but take some kind of action," he said.

Ammar Al-Baluchi is a Pakistani citizen in US custody at the Guantanamo Bay detention center. Charges against him include facilitating the September 11, 2001 terrorist attacks on the United States, acting as a courier for Osama bin Laden and plotting to crash a plane packed with explosives into the US consulate in Karachi.