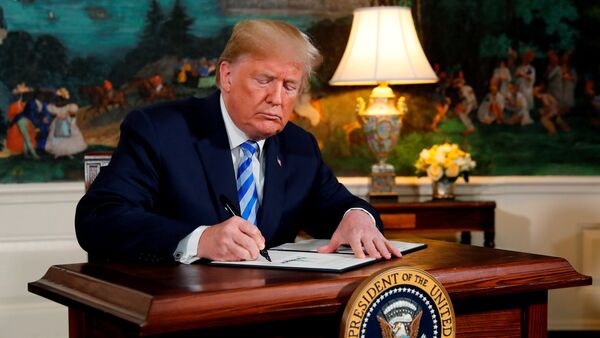 Sputnik: Despite numerous pleas not to withdraw from the deal, President Trump did it anyway. Why has he taken this step?

Dr. Alam Saleh: Trump's decision lets down his close allies in Europe, however, it has made many of his allies in the Middle East very happy, including Israel and Saudi Arabia. So his decision has many reasons, one is to make Israel and Saudi Arabia happy with the decision, secondly he has some psychological issue with whatever Barack Obama, the former president has done, and it was one of his promises during the presidential election campaign to withdraw from this, what he called a "horrible" agreement, and this is what he did.

But in politics, in the world of politics, it's not about what you can do it's also about what is good to do. Of course, the decision does not meet any objectives that the United States may have in its political strategy in the Middle East, if any, of course, because he has no clear alternative to the agreement, he knows that he doesn't get much for withdrawing and walking away from the agreement, he's just disappointed many of his allies, and, in fact, he's isolated himself and Washington rather than Tehran now.

Sputnik: Iran's Supreme Leader Ayatollah Ali Khamenei said Iran won't uphold the nuclear deal without solid European guarantees, and we've heard Russian Foreign Minister Sergei Lavrov saying that Moscow will remain committed to the deal, also the French defense minister made a similar, statement what are your prognoses as to what future is in store for the nuclear deal?

Dr. Alam Saleh: That's exactly what I would call Trump's decision — the second biggest mistake for the last few decades in the Middle East from America. Simply it united Iran with Europe, it's not only Germany, France and Britain, but also Spain, Belgium, Italy they all fully supported the nuclear agreement, Australia and Japan, of course, Iran's traditional allies Russian and China are always there, and as a result of it, he just united the international community, this time against the United States, and this is why I would say by this decision Washington has isolated itself rather than Iran.

Sputnik: Do you think the US could still pressure its European allies to change stance on the nuclear deal?

Dr. Alam Saleh: It can pressure them economically, it can sanction, because at the end of the day the United States is one of the greatest economic powers in the world, but this time it's not only about economy, it's about dignity, it's happened previously that some of these European powers have followed the United States blindly and they have paid the price for it.

It had badly damaged their legitimacy, their credibility and their international reputation, including the 2003 Iraq war for instance. This time Europe needs and it wants to show that it's an independent entity, they are not following the United States in whatever steps they may take, and as a result I think this time it's not only about economy, it's about dignity, it's about politics, it's about credibility, and legitimacy.

Dr. Alam Saleh: I think regretting here means that they cannot meet any of their objectives in just walking away from the agreement. Iran cannot be invaded by the United States, Iran is different than Iraq, Syria or Libya.

Iran Crossed 'Red Line' by Allegedly Attacking Israeli Forces - Netanyahu
Iran has its own very independent, strong political system, and what Trump is hoping that, by putting further pressure on Iran, to deteriorate internal security of the country because at the end of the day Iran is suffering from some economic pressure, there are some political fragmentations in Tehran, however, what Tehran does, and what we can see and hear from Tehran is they want to take this opportunity to unite the different factions and different political parties inside Iran against what the so-called external threat which is the United States and President Trump now, and it may unite Iranians of very different political backgrounds and different political views, and that shows the Iranian people that they should not and cannot trust America in any of its promises, including democracy, including human rights, including better economy and so on.