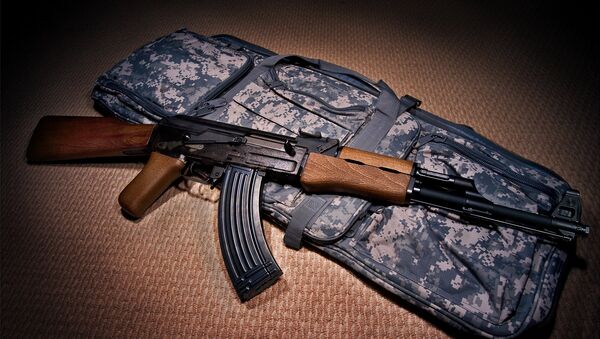 So popular is the Kalashnikov rifle in India that movies, songs, and political discourse often refer to the AK-47. The government’s decision to locally manufacture the rifle under license from its Russian maker has brought pleasure among the armed forces who say that the Kalashnikov is a soldier’s "best companion."

New Delhi (Sputnik) — Cinemagoers in India are eagerly awaiting the release of a biopic on Indian actor Sanjay Dutt titled "Sanju" this summer. The movie is about the tumultuous life of the actor who was caught in possession of an illegally acquired Kalashnikov rifle in the 90s.

Check out latest poster of #Sanju starring #RanbirKapoor.
The 90s look… One man, many lives…

The court was satisfied by Sanjay Dutt saying an AK assault rifle was for self-protection. And he already had three licensed weapons #Travesty

From films to pop albums, from political speeches to popular legends, the AK-47, the most popular gun of the Kalashnikov family, rules the Indian mindset. To top it all off, the Indian government has finally decided to manufacture the legendary Kalashnikov rifles locally in collaboration with its Russian manufacturer, and everyone from army officers to strategists are welcoming the government's decision.

Indian Team Visits Russian Defense Facilities Amid US Sanctions Threat
Top officials of India's Defense Ministry accompanied by representatives of the country's defense industry were in Russia recently to learn from the Kalashnikov manufacturing facility.

"These Rifles will be 'Made in India' under the categorization of 'Buy and Make (Indian),' through both the Ordnance Factory Board and Private Industry at an estimated cost of $1.9 billion," India's Defense Ministry informed the parliament on February 13 this year.

The rifle may be considered for paramilitary forces in the long run. The orders are expected to run into hundreds of thousands of units.

According to the arrangement with Russia, a Kalashnikov factory will be set up in India in collaboration with the OFB to cater primarily to its military needs, though there will be no limitations on export.

India's MoD Delegation at Kalashnikov Concern plant in Izhvesk, Russia led by Mr. Apurva Chandra, Director General Acquisition of the Ministry of Defense of India. The guests were given a tour of the production facility, along with opportunity to test numerous Russian weapons pic.twitter.com/4cqt5H3ir9

Military veterans and strategic experts praise the rifle as a soldier's reliable companion. Lt Gen (Rtd) Deependra Singh Hooda, the officer who oversaw the legendary Surgical Operation of the Indian Army inside Pakistani territory to flush out terrorists in 2016, said that "men prefer" Kalashnikov series rifles.

General Hooda was the general officer commander-in-chief of India's Northern Command, in charge of planning and executing top-secret operations till his retirement last year.

"It has no stoppages and does give any problem during firing. The fact is that when you are in life and death situation, the least you want is that your weapon has to be reliable and the Kalashnikov series has been found to be reliable for the men," Lt Gen (Retd) Hooda told Sputnik.

India’s Defense Team to Visit Russia to Finalize AK-103 Assault Rifle Deal
With increasing counterinsurgency operations that India has to undertake, Lt Gen (Rtd) Hooda says the Kalashnikov has been proven a "good companion" and hence producing it domestically in bulk will be helpful to the forces.

"Men prefer to use Kalashnikov rifles. In fact, the Rashtriya Rifles (the elite Indian paramilitary force trained for counterinsurgency operations, especially in Jammu and Kashmir) is completely equipped with the Kalashnikov and it has been proven useful," Hooda adds.

The Kalashnikov series has proven not just reliable for fighting forces, it has also been a reliable formula for pop stars in India to churn out chartbusters. The latest Indian pop sensation Guru Randhawa broke all records with his hit song AK47, in the album of the same name.

Blaring posters of the album adorn the rooms of music enthusiasts and the opening lines of the pop song says "O mitran da naa chalda, naa chalda, Jiwe chaldi ae AK47," which when translated to English means, "I am famous among my friends like the AK47." The song is a rage among the youth and is a staple party tune.

"The song has been a hit because the singer is likening his popularity and credibility to a gun which is proven for its durability by all means. The gun symbolizes youthfulness, energy and lethal sharpness. Youths associate with such usages more easily and hence singers prefer to use them in their lyrics," Rajesh Verma, a senior writer and film critic, told Sputnik.

Apart from Guru Randhawa's musical album, at least half a dozen chartbusters in India have the AK-47 as its theme and within its lyrics.

Popular political discourse in India also often refers to the AK-47. Former Indian defense minister A K Antony has been referred to multiple times by his peers in Indian politics as "the AK-47."

Political opponents of Delhi Chief Minister Arvind Kejriwal have called him "the AK-49" owing to the initials of his name and his 49-day stint as the chief minister of Delhi. With the famous AK series name attached to him, the Delhi chief minister's media team used the name given by his adversaries to trend his popularity in his subsequent political campaigns and he ultimately came to power with a whopping majority for a second stint. His party AAP used the Kalashnikov connection of their leader to project the effectiveness and strength of Kejriwal.

The gun is so much part of the Indian imagination that the country's top bureaucrat Amitabh Kant, the current head of the Indian official think tank NITI Aayog, is referred to in the media as "AK-47," ostensibly because he is sharp in his approach as an officer and also because he prepares his presentations for the government with precise and accurate "bullet" points.

Just following your lead Amitabh. You are the 'AK47' of Make in India! https://t.co/HVMZY2dvmt

Adding to the popularity of the Kalashnikov rifles in India is the all-around appreciation of the present government for its "visionary" decisions to make the rifles in India.

"The government must be appreciated for it. It's a very stable weapon for the soldiers. The men feel they are more secure and confident when they go into counter-terrorism operation with a Kalashnikov rifle," Lt Gen (Rtd) Shankar Prasad, one of India's top strategists and military analysts, told Sputnik.

Kalashnikov Corporation Working on Killer Pistol to Complement Rifle Range
The decision was pending due to a lack of vision and indifference towards the requirements of the troops. It was never about the cost factor. The move is important because the production of the rifle locally would mean they would not have to depend on any other country for spares and ammunition, he added.

Although unmatched in popularity, what is also worrying for India is that the Kalashnikov rifle is also symbolic of rebellion in this South Asian country and is notoriously intertwined with militancy and insurgency.

Recently, when the Bar Association of Jammu town held a protest seeking a "proper investigation" into the rape and murder of a minor, the senior-most lawyers took to the mic and warned the government that if their demands were not heeded, the hands that carry the tricolor (Indian flag) may soon pick up an AK-47.

While the AK series makers in Russia, Kalashnikov Concern, have already rebranded their rifles as "weapons of peace," India may be hopeful that its decision to manufacture its forces' "best companion" domestically will empower its fighting men and quell insurgency to herald a much-needed truce.

The views and opinions expressed by the speakers in this article are those of the speaker and do not necessarily reflect the position of Sputnik.