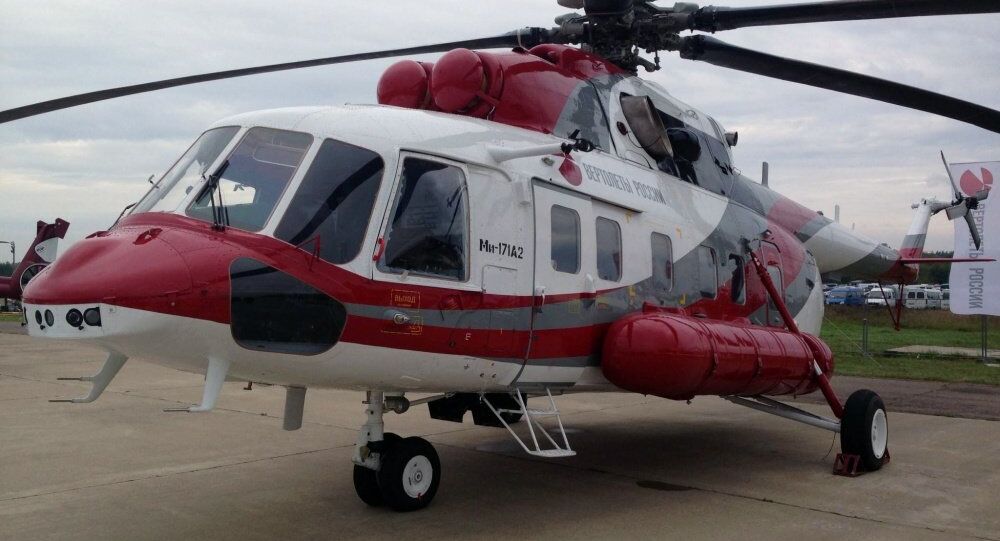 The Mi-171A1, a modernized version of the Mi-17, was among the roster of advanced helicopter gunships and transport rotorcraft presented by the Russian Helicopters Company, which became the biggest attention grabbers at the recent MAKS -2017 air show outside Moscow.

© Photo : http://www.russianhelicopters.aero/
Russian Helicopters, Gazprom Sign Deal on Offshore Mi-171A2 Development
The Mi-171A2 is a civilian version the Mi-8/17 helicopter, but from a technological standpoint, it is categorically considered an aircraft of the 21st century.

While presenting the Mi-171A2 to a large group of Russian and foreign journalists, Dmitry Zuikov, the head of marketing at the Russian Helicopters holding company, said that the Mil-171A2 is powered by newly-designed engines that ensure the rotorcraft’s fail-proof use in high humidity tropical conditions.

“The Mi-171A2 is ideally suited for regions like the Middle East, Southeast Asia and Latin America and boasts the best qualities of the Mi-8/17 series, including the onboard equipment. Because most of its elements are made in Russia, we can freely sell it abroad disregarding any sanctions,” Zuikov added.

The Mi-171A2’s cabin accommodates up to two crew members and 24 passengers in energy-absorbing seats.

The helicopter takes a mere 40 minutes to be converted to a cargo version.

A great deal of attention has been paid to safety. In a departure from the earlier layout where the main fuel tanks were placed on both sides of the airframe and an additional one on top, in the Mi-171A2 the fuel tanks are bigger and are located only on the sides.

© Sputnik / Maksim Blinov
Russian Defense Ministry Plans to Buy Around 15 Mi-38 Helicopters
“This has increased the helicopter’s range up to 800 kilometers and made it safer too,” Zuikov said.

When asked by Sputnik if the impressive experience of the Mil helicopters’ use in high-humidity tropical conditions, mountainous areas and over the sea had been put to use in the design of the Mi-171A2, Dmitry Zuikov said that during their work on the new helicopter, the engineers had consulted  all the Mi-8/17 users in Vietnam, Indonesia, Cambodia, India and China.

“They all said that the Mi-8/17 is a flying Kalashnikov, a platform that can be modified on end to meet every possible demand by its potential users,” Zuikov said.

Apart from the Mi-171A2, visitors at the MAKS —2017 air show also had a chance to watch demonstration flights by the Mi-28NE and Mi-35 helicopter gunships, along with the Ansat light multirole helicopter and medium-class Mi-38.