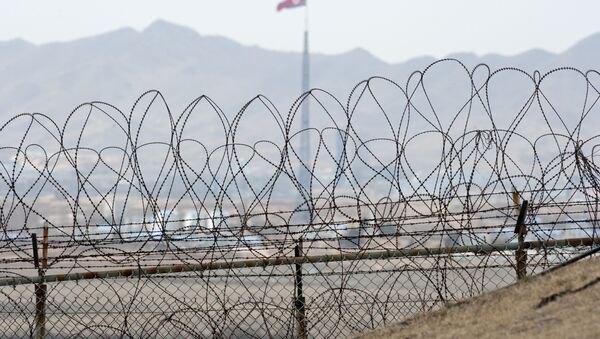 According to the Yonhap news agency, the incident occurred in the town of Paju near the border with North Korea. About 300 police officers surrounded a small truck carrying 5,000 leaflets, balloons and gas cylinders, and prevented the activists from carrying out their plans.

The media specified that despite the government's call to refrain from any agitation, North Korean defector-activists were going to launch balloons with propaganda materials against North Korea's leader Kim Jong-un.

North, South Korea Solve Time Issue
Only a short time ago, leaflet campaigns were one of the causes of tension between Seoul and Pyongyang, however, during the meeting between the leaders of two countries, both sides agreed on a more peaceful approach. Last week North and South Korea dismantled huge loudspeakers used to blast propaganda across their border.

All these signs of normalization of relations between North and South Korea follow a historic summit held on April 27, when South Korean President Moon Jae-in and the North Korean leader Kim Jong-un signed a joint declaration agreeing to take measures to support international efforts aimed at denuclearizing the Korean Peninsula and proceeding with reunion programs for separated Korean families.