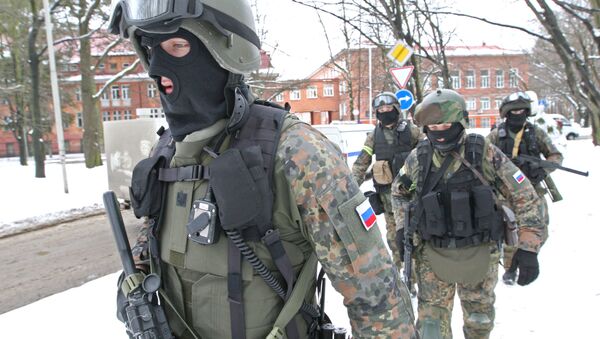 "A number of concrete countries here in the region express interest in joining this database, particularly Argentina and Brazil," Feoktistov said on Thursday. "We are discussing concrete modalities of their joining the database that consists of a huge amount of information about terrorists."

Feoktistov also said that Russia and Argentina are discussing preparation of a draft agreement in the area of combatting terrorism, which could be signed during the visit of Russian President Vladimir Putin to Argentina for the G20 Summit at the end of the year if the sides work fast and effectively.

"Tomorrow, we are planning to discuss with Argentina a process of developing a draft bilateral agreement in the area of fighting terrorism," Feoktistov said on Thursday. "There is a mutual understanding that such a draft agreement will be prepared."

Russia Signs Council of Europe's Antiterror Protocol
"We don’t set any deadlines as we want to prepare a qualitative document. If Argentina also works as fast and effectively, then there will be an opportunity for signing this document during the upcoming visit of the Russian President to Argentina for participation in the G20 Summit in the end of November or the beginning of December," he added.

Daesh is trying to establish reserve, fallback positions in Latin America amid as they suffer losses in Iraq and Syria, the official said.

"It is yet premature to talk about the elimination of this threat to global peace and security. We note increased efforts by IS to create fallback positions in different regions of the world, including in Latin America," Dmitry Feoktistov said Thursday.

"There is a risk that jihadist training camps and recreation facilities can emerge in Latin America and the Caribbean, that terrorists establish contacts with local criminal and drug syndicates, use transport and energy infrastructure for terrorist purposes, and financial systems – for fundraising and money laundering," Feoktistov explained. "We are concerned about increased efforts by extremists to recruit people, in particular in the Caribbean states, where a high number of citizens practice Islam."

The official also said that Revenues of the Al-Qaeda* terrorist group currently top more than tenfold those of the Islamic State (Daesh)* and amount to roughly $40 million a month.

"Now that their [Daesh] channels of financing have been cut, mostly thanks to efforts by the Russian Aerospace Forces, and they have stopped trading in hydrocarbons, IS revenues dropped to a monthly $3 million, while the total income of Al-Qaeda cells around the world is estimated at $20-40 million," Dmitry Feoktistov told reporters in Washington.

Feoktistov also noted that the United States is trying to present Iran and its Hezbollah militant group as a bigger threat than Daesh terrorists.

"Americans have recently stopped calling the IS the main threat, meaning they don’t deny that IS is a threat but they are trying to put this matter on the back burner," Dmitry Feoktistov told reporters in Washington.

Terror-Related Crimes in Russia Dropped 10 Times Since 2012 - Antiterror Group
He said the US government had all but forgotten about Al-Qaeda, despite Russia’s estimates that it has been receiving more money than Daesh. "But Americans talks neither about IS or Al-Qaeda. They are only interested in Hezbollah and Iran," he added.

The official also noted that the United States has not shown any interest and did not contact the Russian delegation that has come to Washington, DC to take part in the Inter-American Committee Against Terrorism.

*Both Daesh (also called IS, ISIS or ISIL) and Al-Qaeda are terrorist organizations and are banned in Russia.