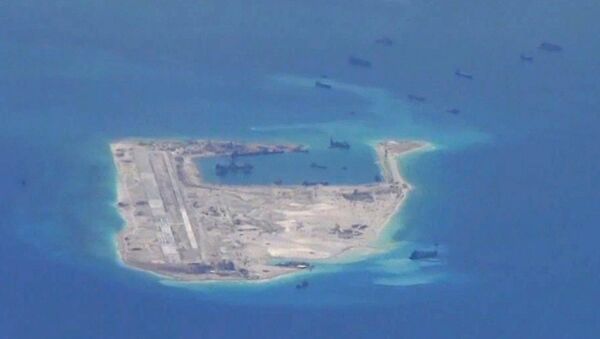 China continues to cement its presence on the disputed Spratly Islands with the most recent reported, but unconfirmed move of installing land-based cruise anti-ship and surface-to-air missile systems. According to an anonymous CNBC source, Beijing has been deploying them for the last 30 days.

US Admiral Philip Davidson, who was recently nominated head of the US Pacific Command had earlier stated in his written testimony to the US Senate on April 24, 2018 that "forward operating bases" were nearly complete with the only missing element being the deployed forces. According to the admiral, when done, China will be able "extend its influence and project power" deep into Oceania.

Greg Poling, a South China Sea expert at Washington's Center for Strategic and International Studies think tank noted that if the recent deployment is true, they will be first missiles on the Spratly Islands. According to him, this deployment moves China closer to dominating the South China Sea.

"Before this, if you were one of the other claimants […] you knew that China was monitoring your every move. Now you will know that you're operating inside Chinese missile range. That's a pretty strong, if implicit, threat," Poling said.

He also noted that the move was not unexpected, as China has already deployed similar missiles north of Spratly, on Woody Island.

Bonnie Glaser, the head of the China Power Project at the Center for Strategic and International Studies (CSIS) think tank said that it's unclear for her, why Beijing chose such timing for the deployment.

"I'm not convinced there was any particular trigger […] The Chinese are on their own timing for when they want to do these things," she said.

Glaser also noted that Beijing knows regional powers and even the US have being expecting such a deployment and figured they could act now feeling the reaction of other powers would be moderate. She added that the fact that all eyes are now set on North Korea only helps China in this situation.

"They think they can get away with it and they are probably right […] China continues to expand their control over the air and sea in the South China Sea," Glaser said.

According to her, the next most likely step will be the deployment of fighter jets to the islands and conduction of military drills using the forces deployed there.

READ MORE: China Much More Able to Handle Trade War Than US — Official

Song Zhongping, a former member of China's artillery corps and a military commentator for Phoenix Television in Hong Kong, said that the US freedom of navigation operations (FONOPs) patrols in the region are the key reason behind the deployment of missiles. According to him FONOP challenges "China's sovereignty and historical domination in the region."

"In order to protect its national interests and its belt and road [initiative] Beijing needs to strengthen its military build-up in the Spratly and Paracel archipelagos so that its navy and air force can go further afield," Song Zhongping added.

China officials have not commented on the news about their deployment of missiles to the Spratly Islands, but noted that all its military facilities there are purely defensive. The US Department of Defense has refused to comment on the situation in the South China Sea saying that the department doesn't "comment on matters of intelligence."

000000
Popular comments
Probably cause they plan to shut that part of the South China Sea down!! The thing that the U.S has been concerned about to begin with...oh well freedom of navigation will continue and I dare China to even try to touch one of our ships there won’t be man made islands anymore
crazyIVAN
3 May 2018, 16:15 GMT
000000
Well done China. You've just put in place a system to dissuade Western inspired "provocative blockades" to your access through Southern sea lanes.
tomlimsw
3 May 2018, 18:24 GMT
000000
Newsfeed
0
New firstOld first
loader
LIVE
Заголовок открываемого материала
Access to the chat has been blocked for violating the rules . You will be able to participate again through:∞. If you do not agree with the blocking, please use the feedback form
The discussion is closed. You can participate in the discussion within 24 hours after the publication of the article.
To participate in the discussion
log in or register
loader
Chats
Заголовок открываемого материала
Worldwide
InternationalEnglishEnglishMundoEspañolSpanish
Europe
DeutschlandDeutschGermanFranceFrançaisFrenchΕλλάδαΕλληνικάGreekItaliaItalianoItalianČeská republikaČeštinaCzechPolskaPolskiPolishСрбиjаСрпскиSerbianLatvijaLatviešuLatvianLietuvaLietuviųLithuanianMoldovaMoldoveneascăMoldavianБеларусьБеларускiBelarusian
Transcaucasia
ԱրմենիաՀայերենArmenianАҧсныАҧсышәалаAbkhazХуссар ИрыстонИронауОssetianსაქართველოქართულიGeorgianAzərbaycanАzərbaycancaAzerbaijani
Middle East
Sputnik عربيArabicArabicTürkiyeTürkçeTurkishSputnik ایرانPersianPersianSputnik افغانستانDariDari
Central Asia
ҚазақстанҚазақ тіліKazakhКыргызстанКыргызчаKyrgyzOʻzbekistonЎзбекчаUzbekТоҷикистонТоҷикӣTajik
East & Southeast Asia
Việt NamTiếng ViệtVietnamese日本日本語Japanese俄罗斯卫星通讯社中文（简体）Chinese (simplified)俄罗斯卫星通讯社中文（繁体）Chinese (traditional)
South America
BrasilPortuguêsPortuguese
NewsfeedBreaking
15:25 GMTTaliban Plans to Form Commission in 2022 to Draft New Constitution
15:22 GMTWatch Fuego Volcano Erupt in Guatemala, Spewing Out Vast Amounts of Smoke and Lava
15:17 GMTRussian Officials Assess Proposal to Populate Siberia With 'Resurrected' Woolly Mammoths
15:13 GMTParis to Bill Canberra for Cancellation of Submarine Deal After AUKUS Pact
14:51 GMT'Britney VS Spears': Pop Star's Fiancé Accuses Docu Makers of Earning Profit From Her Story
14:41 GMTRussian Union of Journalists Chief Slams 'Unacceptable' US Sanctions Against Colleagues
14:31 GMTUS Investment Firm Purchases Italy's Oldest Football Team
14:29 GMTUS to Find Ways to Get More Help to Haitian Migrants After US Envoy Resigned, State Dept. Says
14:25 GMTAnthony Joshua Says He Would ‘Fight King Kong' if He Had to as He Defends Titles Against Usyk
14:18 GMTFormer Nazi Helmut Oberlander Dies in Canada Before He Could Be Deported, Reports Say
14:07 GMTWhat's Behind Africa's Increasing Drive to Launch Satellites?
14:06 GMTExpo 2020 in Dubai Set to Boost Economic Development in Arab World, Organiser Says
13:58 GMTTwo Afghan Evacuees Charged With Sexual, Physical Assault in US, Justice Department Says
13:51 GMTBritish Government Preparing for 'Worst-Case Scenario' of Gas Prices, Says MP
13:43 GMTOutrage as Missouri High School Students Reportedly Come Up With Petition to Reinstate Slavery
13:42 GMTEC Does Not Expect Increase in Smartphone Prices Over Universal Charging Port Regulation
13:26 GMTAmericans Favour Trump Over Biden After Afghanistan Pullout Disaster, Poll Says
13:25 GMTComputer Game to Measure Children's Mental Development Launched by MSUPE
13:21 GMTDay 3 of 76th Session of UN General Assembly
13:18 GMTRoscosmos Starts Preparations for Landing First Russian Cosmonaut on Moon