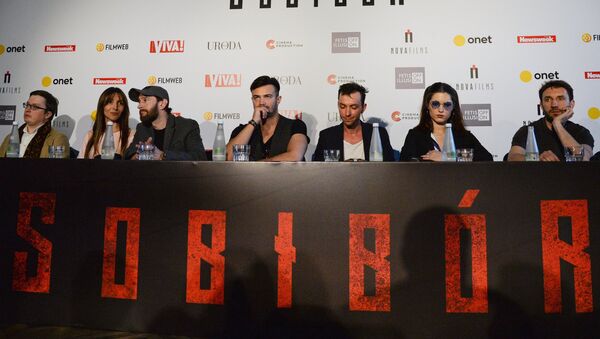 WASHINGTON (Sputnik) - The Russian war drama film "Sobibor" about the 1943 uprising at the Nazi death camp in Poland premiered at the Russian embassy in Washington, DC.

The movie, marking the 75th anniversary of the Sobibor uprising and the commemoration of its victims, was directed by famous Russian actor Konstantin Khabensky who attended the premiere. The film also stars Christopher Lambert.

The film is based on a true story of the only successful revolt at a Nazi death camp during the Second World War led by Soviet officer Aleksander Pechersky. Some 300 prisoners managed to escape the camp, while only around 50 of them survived the war.

The Sobibor Nazi death camp operated from May 1942 until October 1943. According to the latest data collected by historians, Nazis killed about 250,000 Jews from Poland and other European countries at this camp.

Addressing the reporters at the premiere, film director Konstantin Khabensky expressed his hope that the film would have a great effect on the US audience.

Khabensky stressed that the World War II theme remained "a point of great concern and pain" for Russia, noting the high importance of such kind of films for the next generations.

Khabensky noted that the tour in support of the movie was rather symbolic: it started on April 23 in Warsaw — the events described in the film took place in Poland — and would end on May 9 in Berlin. The director also expressed hope that the movie would be touring in both Russia and across the world for a long time.

The special envoy spoke following the premiere of the movie, marking the 75th anniversary of the Sobibor uprising and the commemoration of its victims, at the Russian Embassy in Washington D.C.

"I think it should be shown everywhere. I think movies like this deepen understanding of the Holocaust… It’s a pretty powerful movie and it’s very gut-wrenching… It’s tough to watch, but it’s necessary because people need to know that these things actually did happen, this war did happen." Yazdgerdi said, when asked whether the movie should be shown to more public in the United States.

The Russian Ambassador said that "Such crimes [as the Holocaust] can never be forgiven or forgotten," adding that recently there have been attempts to rewrite history and "cast a shadow over the heroic victory of our country that together with its allies defeated the Nazis and stopped the German war machine of destruction."

The showcasing was held with the support of Susan Carmel, Chairman of the American-Russian Cultural Cooperation Foundation.

"It’s a very, very important and magnificent film… What Konstantin [Khabensky, film director] has done is incredibly important for the world," Carmel said.

She pointed out that nowadays there was a lot ignorance of history and, particularly, of World War II.

"There was a recent survey that 66 percent of Millennials do not even know what Auschwitz [one of the biggest Nazi death camps] is… Most of them think that less than two million Jews died in the Holocaust. Almost none of them realize that 27-30 million Russians died in World War II, and that they helped to liberate the concentration camps and free so many people… So, this historical background is critically important particularly in light of issues today," Carmel stressed.

The film is expected to be released on May 3.