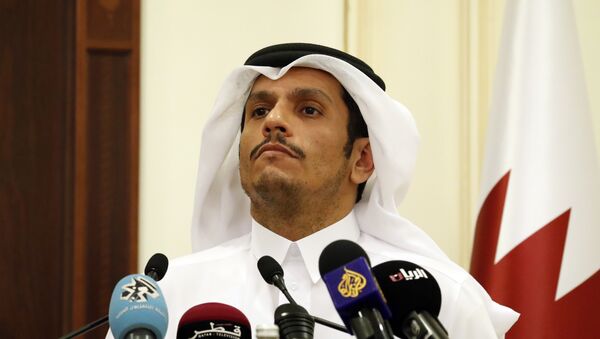 The Saudi Foreign Minister had announced that Riyadh was willing to send troops to Syria as part of a wider international coalition if it receives an invitation to do so. He also expressed his opinion that Qatar must do the same.

Sheikh Mohammed bin Abdulrahman Al-Thani has branded Saudi Arabia's demands for Qatar to pay for US troops to remain in Syria and the sending of its troops before the US withdraws an attempt to influence public opinion in the Arab world, according to France 24 TV channel.

"This statement [by the Saudi Foreign Ministry] is not worthy of an answer. Qatar refutes the brainwashing of the public opinion in the Arab world in such a way," Qatar's Foreign and Deputy Prime Minister said.

He also admitted that Qatar's delegation was informed during its visit to the US about the idea of sending troops to Syria. Al-Thani believes that any decisions on Syria must be made as a part of the comprehensive solution to the Syrian problem.

"[Qatar insists] on developing a political solution to the Syrian problem, which would embed the political transition of power, punishment of war criminals and return stability to Syria," Al-Thani said.

Saudi Foreign Minister Adel Jubeir stated on April 25 that Qatar must send its troops to Syria prior to the US withdrawal from its base in the country. Earlier US President Donald Trump claimed that Middle Eastern countries must pay for everything that happens in their region as well as deploy their soldiers on the ground, possibly referring to the situations in Syria, Iraq and Afghanistan. He also added that without US protection, "wealthy" Arab states "wouldn't last a week."

The Saudi Foreign Minister said on April 23 that Riyadh is ready to send its troops to Syria, but is waiting for an official invitation.

The Iranian Foreign Minister's advisor Hussein Sheikholeslam has expressed his opinion in an interview with Sputnik that the deployment any additional troops to Syria will not bring about peace, but instead will only complicate the crisis.