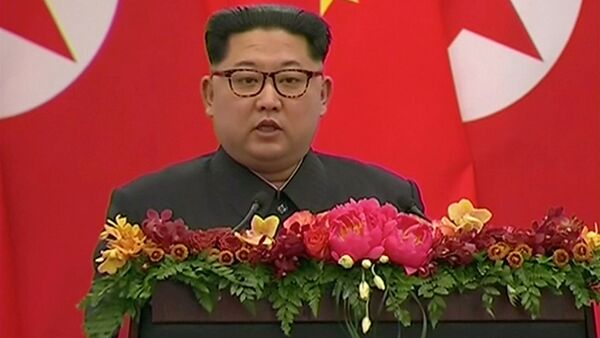 As peace and disarmament summits with both South Korea and the US grow near, North Korea’s main nuclear test site remains “fully operational,” according to 38 North, a US watchdog website devoted to analyzing the isolated Democratic People’s Republic of Korea, north of the demilitarized zone on the northern 38th parallel.

"North Korea's Punggye-ri nuclear test site, where North Korea has conducted six acknowledged underground detonations is still, as far as we can tell, fully operational," 38 North reported Monday on its website. However, North Korea on April 20 pledged to end its nuclear testing program and join international efforts to completely abolish the practice.

"Following Pyongyang's sixth nuclear test in September 2017, one area at the site — the North Portal, located at Mount Maptap where the last five underground nuclear tests had been conducted — was apparently abandoned," 38 North reported Monday.

"However, significant new tunneling was noted at the West Portal, another area of the site, up through early March 2018. That renewed tunneling was curtailed by mid-March, but not entirely stopped through early April, suggesting that either the tunnel was completed and ready for future renewed testing or that the slowdown simply mirrored the ongoing political changes underway," the organization added.

The organization also noted that test tunnels, which can be accessed through the South Portal, have primary and secondary entrances that could be used for underground nuclear tests in the future.

"In short, there is no basis to conclude that the Punggye-ri nuclear test site is no longer viable for future nuclear testing. There remain two portal areas located in more pristine competent rock that can be used for future tests if Pyongyang were to give the order. Whether that will stay an option will depend on reaching verifiable agreements that build on Pyongyang's pledge to shut down the facility," 38 North concludes.

North Korean leader Kim Jong Un announced on April 20 that Pyongyang would halt its nuclear and long-range missile tests and shut down the Punggye-ri nuclear test site, where all six of its nuclear tests have taken place. The decision was reportedly made at a meeting of the ruling party's central committee on Friday.

"From April 21, North Korea will stop nuclear tests and launches of intercontinental ballistic missiles," Kim announced. "The North will shut down a nuclear test site, where it has conducted all six of its nuclear tests."

The announcement was praised by US President Donald Trump.

"Progress being made for all!" Trump tweeted.

However, on Sunday, Trump incorrectly announced that Pyongyang had "agreed to denuclearization," although North Korea did not explicitly state that it will give up its existing nuclear weapons.

On Monday, South Korean President Moon Jae In called North Korea's decision to halt nuclear and ballistic missile test an "important decision" and a step toward the complete denuclearization of the Korean peninsula.

US Defense Secretary James Mattis said Monday he is optimistic that upcoming talks with North Korea could be productive. "Right now, I think there is a lot of reasons for optimism that the negotiations will be fruitful and we'll see," Mattis told reporters at the Pentagon