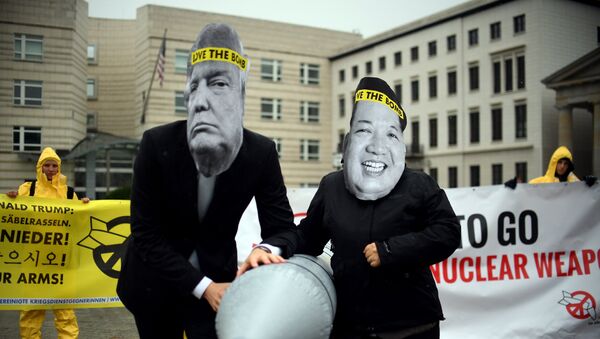 © AFP 2023 / Britta Pedersen / dpa
Subscribe
International
India
Africa
TOKYO (Sputnik) - Japan expects that the upcoming summit between the United States and North Korea will pave the way for the settlement of nuclear and missile issues, as well as for the release of Japanese nationals, held by Pyongyang, Japanese Prime Minister Shinzo Abe said.

"We have held tense talks with President Trump on North Korea. A high-level meeting between the North and the South is being planned, then the US-North Korean summit … I hope that the US-North Korean summit will be historic and will pave the way for the settlement of the issues of nuclear arms, weapons of mass destruction, various ballistic missiles and the most important problem – the detained Japanese citizens," Abe said late on Wednesday at the joint press conference with the US leader.

The Japanese prime minister added that Tokyo, Washington and Seoul would jointly cooperate on the settlement of the aforementioned issues.

Abe is currently on his visit to the United States, during which he met with US President Donald Trump in order to discuss preparations for the upcoming summit between the US leader and his North Korean counterpart Kim Jong-un, as well as issues of mutual interest.

Asia
Moscow Expects Kim’s Proposals on Inter-Korean Cooperation to Yield Results
On March 5-6, South Korea’s high-ranking delegation visited North Korea. Upon the delegation's return, the South Korean presidential office announced that Seoul and Pyongyang had reached a historic agreement on holding the third ever summit of the countries’ leaders.

The meeting between South Korean President Moon Jae-in and Kim is scheduled for April 27, and it will be followed by Trump’s meeting with Kim, expected to take place at the end of May or June.