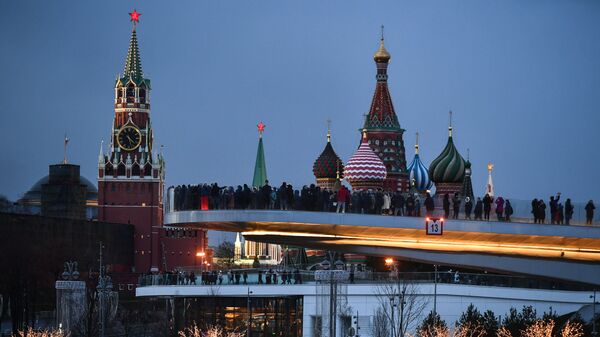 © Sputnik / Maksim Blinov
/
Go to the mediabank
Subscribe
International
India
Africa
MOSCOW (Sputnik) - The Russian leadership has not ruled out the possibility that Washington may take a hard line on new anti-Russia sanctions to inflict the maximum amount of harm on the country’s economy and is considering safeguard measures to be prepared for the worst-case scenario, a Russian news outlet reported, citing government sources.

As a safeguard, the Russian authorities are mulling the establishment of a special bank that will be used for acquiring Russian state debt and the adoption of measures that will enable confidentiality with regard to names of debt holders, according to one of the sources.

World
US Shows 'Undisguised' Economic Aggression Toward Russia - Moscow on Sanctions
The Kremlin is concerned that Russia's disconnection from the SWIFT system could lead to the collapse of the national banking system and suspension of external transactions, particularly with regard to gas deliveries, another government source noted. Under such a scenario, Moscow has considered engaging the so-called bridge financing companies, which would facilitate external transactions, the source clarified.

Another sensitive measure could be further sanctions against Russia's leading banks, Sberbank and VTB Bank, a source close to the Kremlin told the news outlet.

Trump Still Willing to Meet Putin Despite Rising US-Russia Tension - White House
Since 2014, both banks have faced restrictions on access to international financial markets as a result of US sanctions following the events in Ukraine. However, a possible ban on opening correspondent accounts in the United States or inclusion in the Specially Designated Nationals (SDN) list are seen as harsher restrictions that would pull the plug on the banks’ international operations, the source added.

In early April, Washington unveiled new sanctions against Russia over Moscow's alleged global destabilization efforts. Among the individuals and entities affected by the sanctions were several businessmen and companies controlled by them, as well as a number of high-ranking officials. On Sunday, US Ambassador to the United Nations Nikki Haley announced that President Donald Trump's administration planned to roll out new sanctions on Monday. The Washington Post reported later that Trump had not yet given final authorization to implement a new round of sanctions against Russia.