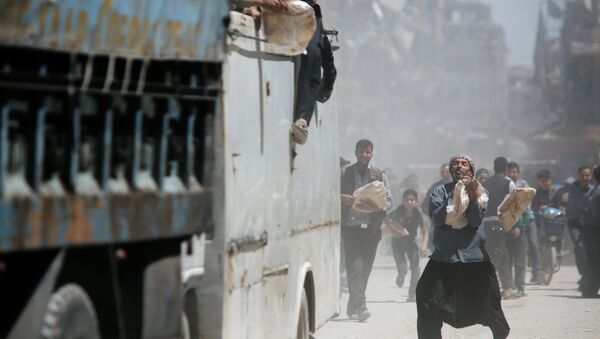 © REUTERS / Omar Sanadiki
Subscribe
International
India
Africa
WASHINGTON (Sputnik) - The Western attack against targets in Syria over the weekend will hamper the Astana peace process given that they have emboldened Turkey and its leader Recep Tayyip Erdogan, Virginia Senator Richard Black told Sputnik.

"The Geneva [peace process] has always been rigged and ineffective. The attacks will hinder Astana because they emboldened Turkey’s dictator, Erdogan," Virginia Senator Richard Black said.

Black, who met with President Bashar Assad during a visit to Syria in April 2016, said he believes that despite the setback, the negotiating parties in Astana will continue to make progress.

Clashes Break Out Between Syrian Government Troops, Militants in Douma
On April 14, the United States, France and the United Kingdom fired missiles on targets in Syria that they claimed were linked to the Syrian government’s chemical weapons program. The attack came in response to an alleged chemical weapons attack in the city of Douma.

The Syrian government denied it has used chemical weapons and said the Jaish al-Islam terrorist group staged the attack to pave the way for foreign intervention in Syria. Moreover, the Russian Reconciliation Center for Syria said its representatives visited the place of the alleged attack and questioned local doctors, who said they had not received individuals with symptoms of chemical poisoning.

The Turkish government said it supported the strikes against the targets in Syria despite Ankara’s participation in the Astana peace talks.

World
NATO Chief: US, Allies' Strikes on Syria Were 'Signal' for Syria, Russia, Iran
Kazakhstan’s capital of Astana has hosted eight rounds of talks on the Syrian settlement with the most recent one held in December. During the latest meeting, Russia, Iran and Turkey — the three Syrian ceasefire guarantor states — agreed to set up a working group on the release of detainees, adopted a statement on humanitarian mine clearance and discussed preparations for the Syrian National Dialogue Congress in Sochi.

Syria has been engulfed in a civil war since 2011, with opposition factions and terrorist groups fighting the Syrian Army and other government forces in order to topple the government of President Bashar Assad. The international community has taken a number of steps aimed at settling the crisis, including organizing peace negotiations in Geneva and Astana.