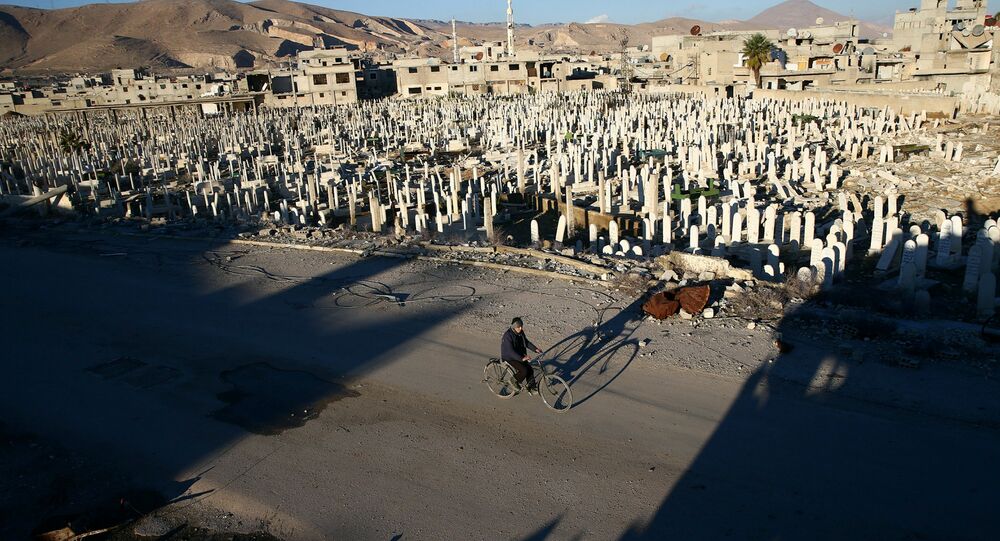 The Russian Envoy to OPCW said that chemical weapons provocation in Syria was carried out by non-governmental organizations that the UK and the US paid for cooperation.

According to Shulgin, Russia has irrefutable evidence that there was no chemical weapons incident in the Syrian city of Douma.

"Therefore, we have not just a "high degree of confidence," as our Western partners claim, but we have incontrovertible evidence that there was no incident on April 7 in Douma and that all this was a planned provocation by the British intelligence services, probably, with the participation of their senior allies from Washington with the aim of misleading the international community and justifying aggression against Syria," The Russian Envoy to OPCW stated speaking to the OPCW Executive Council.

According to the Russian Envoy to the OPCW, the direct executors of this provocation were pseudo-humanitarian NGOs sponsored by opponents of the Syrian government.

"Among them, are the notorious 'White Helmets,' which some delegations are so fond of praising," Shulgin noted.

© Sputnik / Dmitriy Vinogradov
US Imposing Sanctions Merely for Russian Presence on International Arena - Moscow
He stressed that Moscow has already stated and confirms yet again that "these structures on a fee-based basis cooperate with the governments of the United States, the UK and some other countries."

Shulgin has emphasized that the Russian-Iranian plan on the Douma resolution has put the US in an awkward position, as the OPCW Executive Council has denied voting on it.

"The Russian-Iranian draft was carefully prepared, it was a balanced document… Surprisingly, this purely technical document caused panic among our Western partners… As a result, the chairman decided to conclude the session without adopting any document," Shulgin told reporters.

Russian experts who conducted the verification of reports on the use of chemical weapons in the Syrian city of Douma, found participants of the video’s filming, which was presented as evidence of the supposedly occurring chemotherapy, according to the Russian Envoy to the OPCW.

"Not a single witness, not one poisoned person in the hospital could be found. No remains of chemical weapons were found. But we have managed to find direct participants in the filming of the production video, which was presented as ‘proof’ of the chemical attack," Shulgin said.

He also called attention to the fact that Eastern Ghouta was already practically liberated, at that moment and an agreement had been reached with the last groups of militants in Douma; that they had been provided with a secure humanitarian corridor for the departure to Idlib province for both themselves and their families.

"Everything has been developing according to the script that was prepared in Washington. There is no doubt that Americans are playing the ‘first violin’ in all of this. The United States, the United Kingdom, France and some other countries after the "fake" addition from the White Helmets and their ilk in Douma, immediately pounced upon the Syrian authorities with accusations," Alexander Shulgin said.

Shulgin stated that the United States, the UK and France are not interested in conducting an objective investigation in the Syrian city of Douma.

According to Shulgin, the US Envoy to the OPCW has presented the missile strike against Syria as an act of retaliation, adding that the US is considering options for further action in Syria if chemical attack claims are not confirmed.

"They put the blame on the Syrian authorities in advance, without even waiting for the OPCW mission to begin to establish the possible facts of the use of chemical weapons in Syria," he said.

According to the OPCW Chief, the OPCW mission, which is comprised of 9 people, has not yet deployed to the Syrian city of Douma, Damascus and Moscow said that there are still pending security issues.

"The Team has not yet deployed to Douma. The Syrian and the Russian officials who participated in the preparatory meetings in Damascus have informed the FFM Team that there were still pending security issues to be worked out before any deployment could take place. In the meantime the Team was offered by the Syrian authorities that they could interview 22 witnesses who could be brought to Damascus," OPCW Director-General Ahmet Uzumcu said as quoted by the organization.

© REUTERS / Simon Dawson
Syria Strikes 'Right Thing to Do': UK PM May-Parliament Heated Face Off
The situation in Syria has significantly escalated over the last few weeks after reports of several Syrian opposition online media outlets, citing militants that the Syrian Army had used chlorine in the town of Douma and killed up to 70 people.