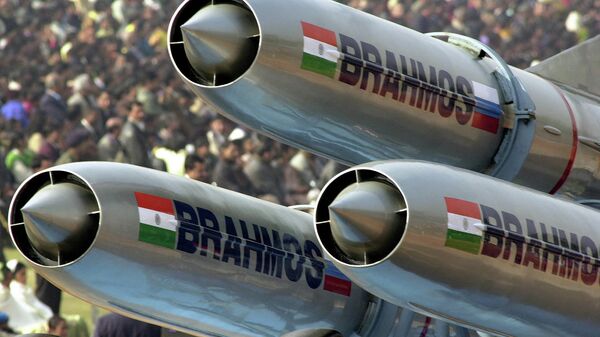 India says that there is sustained interest among countries of South East Asia and Africa in purchasing the BrahMos but negotiations are taking time as there are a number of crucial issues that need to be addressed before exporting what has been touted as the world’s deadliest missile system.

New Delhi (Sputnik) — The Indian Defense Ministry has reiterated that serious negotiations are going on with the countries that have exhibited interest in the BrahMos supersonic cruise missile — an Indo-Russia joint project. Defense Minister Nirmala Sitharaman has said that India is keen on exporting the missile to friendly nations.

"There is a lot of interest particularly on this missile (BrahMos)… definitely lots of interest. On that, a lot of discussions are also going on. Many things are being discussed within the government and on the other end, with governments which want to buy them. Decision making can sometimes be frustratingly long drawn but the interest is sustained. Sometimes it is the question of the cost being negotiated, but interest on Indian missiles is definitely growing and we are addressing it. We want to able to export it to friendly nations," Nirmala Sitharaman said, replying to a query posed by Jamshyd N. Godrej, CMD of Godrej & Boyce at the annual summit of the Confederation of Indian Industries (CII) in New Delhi.

Godrej Aerospace, a unit of Godrej & Boyce Mfg. Co. Ltd. has been producing airframes for the air-launched version of BrahMos missile.

India, Russia Further Collaboration in Defense Tech After Success of BrahMos
For the past few years, there have been speculations about Vietnam negotiating with India for the purchase of the BrahMos — touted as the world's deadliest missile. Apart from Vietnam, several other South-East Asian countries, including Malaysia, Singapore, and Indonesia have evinced interest in purchasing the missile, according to reports. Some active discussions have also been going on with the South American countries like Peru and Chile. Seeking market opportunities in this part of the world, BrahMos Aerospace had participated in the FIDAE show held in Santiago, Chile, from April 3-8.

Presently, BrahMos Aerospace is working on an order worth $7 billion placed by the three services of the Indian Armed Forces. "If exports fructify, then the order for BrahMos missiles can almost double in another five years," Sudhir Kumar Mishra, CEO, BrahMos Aerospace had said last October.

Based on demand for its armed helicopters, naval equipment, missiles including the BrahMos and the Akash air defense system, the Indian Defense Ministry has set an ambitious target of exports to the tune of $5 billion in the next seven years. In the last few years, the state-owned Defence Research & Development Organization (DRDO) has developed over two dozen platforms, like the Arjun tank, Tejas fighter, airborne early warning and control (AEW&C) system, advanced towed artillery gun system (ATAGS), weapon locating radar, high-speed heavyweight ship-launched torpedo, anti-torpedo decoy system which have the potential to attract countries in Africa and South-east Asia.

India’s Propellant Booster to Help BrahMos Achieve Unimaginable Speed
To boost exports, for the first time ever, the Indian Defense Ministry has also called over 40 defense attachés from missions abroad for a series of specialized briefings starting from Monday. They will also take part in the Defexpo which is set to be inaugurated by Prime Minister Narendra Modi later this week.

"I do not want to change the term of reference of their job (defense attachés) but I think defense attachés not only should identify those procurement requirements for us to buy but also be able to speak about what we are producing so that nation outside can look at India as a producing market also rather than a buyer market," Nirmala Sitharaman said at the event.

The attachés work at Indian missions across the world and are primarily tasked with defense diplomacy.

"I am not asking them to become marketing experts but they should be also talking about a lot about what India's defense manufacturers are doing to enhance the capacity or preparedness of the Indian Armed Forces. If they do it, I think naturally they shall create an interest among people outside to see our manufacturers' capacities and in a way sell India without being a market expert," Sitharaman added.