#IBelieveHer Trending After 'Not Guilty' Verdicts in Ireland Rape Trial 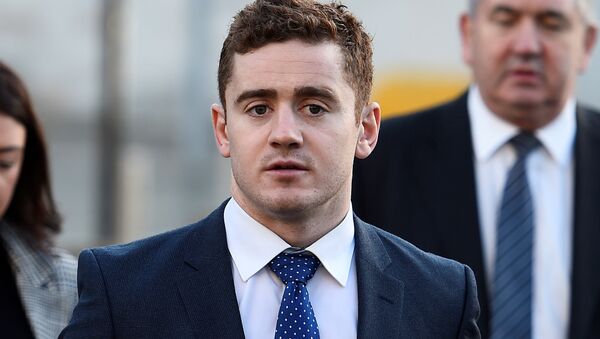 #IBelieveHer is trending on Twitter following 'not guilty' verdicts in the trial of two international rubgy players in Northern Ireland; during the ten week trial the accuser gave evidence on eight separate occasions.

In court she said: "Rape is a game of power and control. The only way to take power back is when you actually do something about it."

The damage this trial has done to any woman who has been sexually assaulted or will be sexually assaulted cannot be quantified. What woman would put herself through that by reporting a crime.
Disgusted but sadly not surprised by the verdict.#Ibelieveher

The professional rugby players will return to the pitch, their careers "blighted" by the false accusations, their lawyers said.

Jackson’s soliticor said Jackson’s main priority is to now get back playing on the field for Ulster and Ireland.

Statement from IRFU and Ulster.. pic.twitter.com/6XTknZ2Zk9

This woman was bleeding and crying on the night in question. Her taxi driver remembered her. She told people what happened. She sought medical treatment the next day. She reported what happened. She did everything you are supposed to do. And yet.

Despite the unanimous 'not guilty' verdicts and statements offered to the press by the rugby player's legal teams, support for the accuser is growing on social media with #IBelieveHer trending on Twitter.

The #IBelieveHer hashtag gives an insight into how deeply upsetting this court case was for so many people. If nothing else, it must surely lead to a change in how rape trials are conducted. Is there any other crime in which the alleged victim appears to be the one on trial?

​You are raped, you tell your friends, you attend a doctor, you are examined, you go to the police, you give evidence, you stand trial, you have your underwear held up in court, you are called a tramp, a regretful slut, you did everything right, you never had a chance #IBelieveHer

​I served on a rape trial jury last summer. A not guilty verdict does not mean no guilt. The standard of proof required to convict + unanimous agreement from 11 people is such a high threshold, it's a miracle it ever happens. The poor girl. #IBelieveHer

​That women actually had the courage to stand up for herself and report her rape, we all saw the texts, the taxi driver knew the reason straight away why he was being contacted, she didn’t consent but justice still wasn’t served #IBelieveHer

Ireland's Rape Crisis Network says it will continue to provide support for victims of rape and sexual assault following the unanimous not guilty verdicts in the trial of two rugby international players, Paddy Jackson, and Stuart Olding, and their friends Blane Mcllroy and Rory Harrison.

If you are a victim of a sexual crime please know that we have free specialist support available so that you never have to be alone. If you choose to report we will be with you every step of the way — Court and Garda accompaniment services https://t.co/8NaZ5R62i3

​"If you are a victim of a sexual crime please know that we have free specialist support available so that you never have to be alone. If you choose to report we will be with you every step of the way," the organization tweeted.

People reacting to the 'not guilty' verdict are turning to social media to support the woman who told the trial that Paddy Jackson had raped her and Stuart Olding forced her to perform oral sex on him and later Blane Mcllroy came into the bedroom naked, asking for sex. #IBelieveHer becomes Twitter's top trend in Ireland.

I don't know the ins and outs of the Belfast case, but #IBelieveHer trending shows that there has been huge damage to the credibility of the legal system. No doubt fewer sexual assault victims will now come forward, and that is a huge shame.