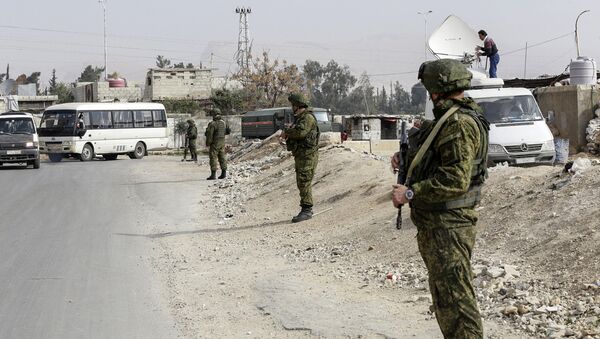 The Russian Defense Ministry has reported on recent developments in the tense situation in Syria's Eastern Ghouta.

"Last night, during a search of militants, 15 suicide belts were found and seized. Eight belts for suicide bombers were confiscated eight days ago by Russian military police and Syrian police. Also, 289 grenades were confiscated from militants leaving [E Ghouta]," the report stated.

According to the ministry of defense's report, 6,400 militants and their families have left the area through the humanitarian corridor from East Ghouta on Tuesday by buses.

"Since March 24, as a result of the agreements reached by senior officials of the Russian center for Syrian reconciliation with the leaders of the Failaq al-Rahman group, the Failaq al-Rahman militants continue to withdraw from the settlement of Irbin (Eastern Ghouta). On March 27, 6,432 militants and members of their families left the area through the organized humanitarian corridor and were transported by 102 buses to the province of Idlib," the ministry's statement read.

The ministry emphasized that throughout the route, their security was provided by Syrian police under the supervision of the officers of the Russian Reconciliation Center and representatives of the Syrian Arab Red Crescent.

Speaking about the humanitarian corridor later in the day, Russian Defense Minister Sergei Shoigu stated that ver 9,600 militants with families have left the besieged Damascus suburb of Eastern Ghouta under the deal.

A deal on the withdrawal of militants from the area was recently reached between militants and the Syrian government. After the transfer, the Syrian Army will control about 85 percent of the total territory of the initial pocket.

The transfer comes after the Syrian army and allied ground forces launched operation Damascus Steel to liberate the East Ghouta region from hardline Islamist militants who have occupied the area since 2012. Under the deal, militants from Erbeen, Zamalka, and other areas will be transferred to the northwestern province of Idlib — one of the last remaining militant bastions in the country.