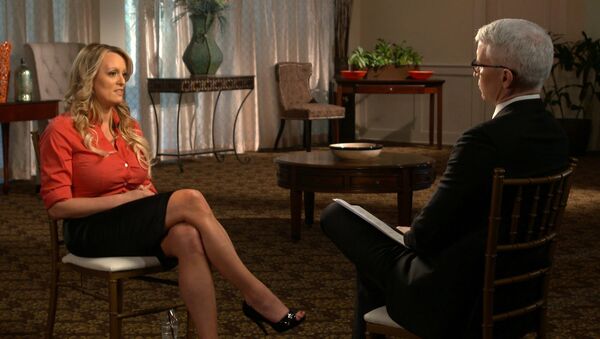 The former adult movie star-turned successful businesswoman asserts that the agreement was never signed by Trump and now will appear in a high-profile news show, sitting down with CBS's Anderson Cooper for an extended interview detailing her illicit liaison with a married man and father who is now a sitting US president.

In a Friday tweet the lawyer suggested that a DVD held in a safe contains additional and as-yet-unreleased new details.

Daniels acknowledged on Saturday that the 24/7 media attention — including propositions, job offers and even death threats — has made her regular life all but impossible to regain.

An ardent equestrian, Daniels noted in a Saturday phone conversation that the attention is "cutting into my horse show time," as well as "time with friends," cited by Nytimes.com.

Earlier last week a former Playboy model sued the National Enquirer's parent publisher to get out of a pact aimed at burying the story of her 2006 affair with Trump.

In another developing story, a New York state court judge recently rejected a move by Trump lawyers to employ presidential immunity as a means of canceling a groping lawsuit brought by a former Apprentice contestant for unwanted touching and kissing at the hands of the former reality TV show producer.

Trump spokespersons have denied the accusations, claiming that the 45th US president did not conduct the affairs and that he is not aware of the payments made to keep his former paramours silent.