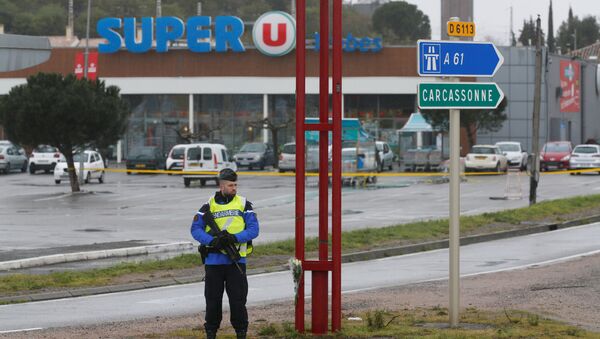 French President Emmanuel Macron has said the attack on the supermarket in southwestern France was being treated as a terrorist act, after reports that a gunman took hostages and demanded the release of a suspect in the 2015 Paris attacks.

Police have arrested a second person believed to be linked to the attack in Trèbes, France which led to the death of four people, and the terrorist himself, a judicial source said.

The French gendarme who swapped placed with a hostage in the supermarket siege crisis has died of his wounds, Interior Minister Gerard Collomb announced earlier.

Lieutenant-Colonel Arnaud Beltrame, 45, rushed with a group of officers to the scene in the Super U, after the attacker, who claimed allegiance to Daesh*, stormed the supermarket and fired at shoppers and staff.