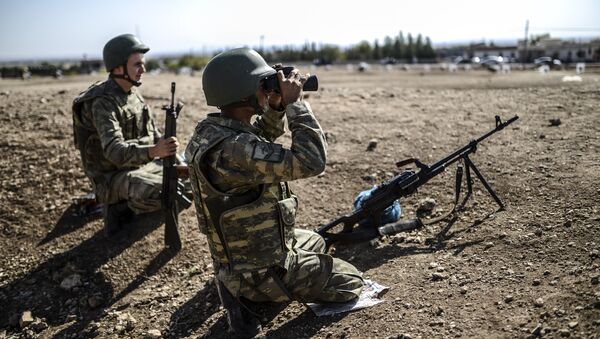 The US has provided the Kurdish-led Syrian Democratic Forces (SDF) with arms as part of its wider military cooperation with the group in Syria, despite Turkey repeatedly voicing concerns over the group’s ties to the Kurdistan Workers’ Party (PKK) – which has long been designated a terror organization by Turkey, the EU and the US.

Troops from the Turkish Army discovered and seized two AT-4 unguided anti-tank weapons from PKK forces during counter-terrorist operations in southeastern parts of the country on Wednesday, according to an official Twitter account operated by the Turkish Armed Forces.

It’s unclear how many PKK militants – if any – were killed, injured or captured in yesterday’s military operation in Sirnak province.

Although the AT-4 armament was developed and produced in Sweden by Saab Bofors Dynamics, it’s believed that the US originally supplied the launchers to Kurdish-led forces in Syria, before they were handed over to PKK combatants to be used against the Turkish army.

Alternatively, the weapons may have originally been provided to Peshmerga forces in the semi-autonomous Kurdish region in northern Iraq by the US. The PKK has previously been found to be in possession of US-supplied advanced arms on a number of occasions.

Turkey has fought a bloody multi-decade war against the group, with much of the fighting concentrating in the country’s predominantly Kurdish southeast.

Turkish Warplanes Conduct Raids in Northern Iraq, Destroy 18 Kurdish Targets
In addition to conducting recent counter-terrorist operations against the PKK on Turkish soil, warplanes from the Turkish Air Force have regularly carried out airstrikes in northern Iraq, targeting their military installations and hideouts.

Dozens of PKK militants have been killed in northern Iraq so far this month, according to state-run Turkish media.

Meanwhile, Turkey-backed forces launched operation Olive Branch in early 2017 to oust the SDF from parts of northern Syria, and have made significant territorial gains in the area.